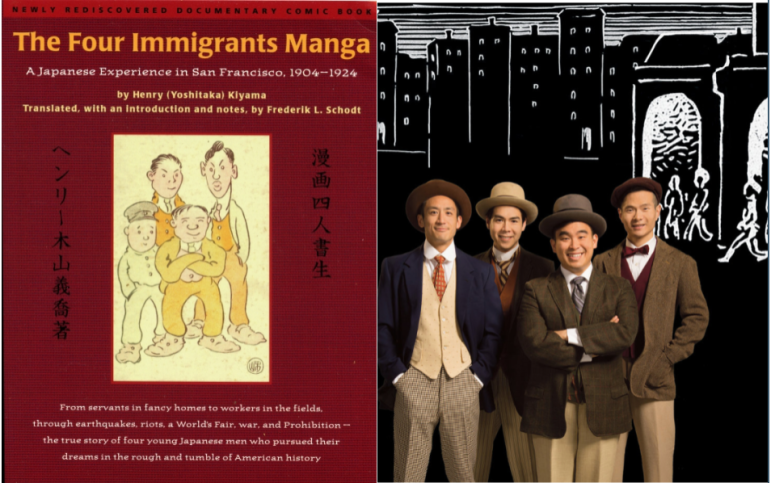 May GLLI Blog Series:  Japan in Translation, No. 15

Editor’s note:  Fred Schodt is best known for his work popularizing manga and anime outside of Japan.  But he has also spent much of his career shedding light on little known aspects of Japanese popular culture and history:  for instance, the story of Native American adventurer Ranald MacDonald (Native American in the Land of the Shogun) and a Japanese circus troupe that introduced Japanese popular culture to the West (Professor Risley and the Imperial Japanese Troupe).  Here, he talks about his work on The Four Immigrants Manga. 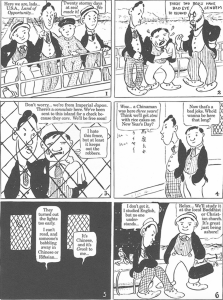 Around 1980 I made a surprising discovery. I was doing research in UC Berkeley’s East Asian Library, working on my first book, searching through an old, pre-digital-era paper card catalog for manga-related Japanese texts. I saw something titled Manga Yonin Shosei (literally, “The Four Students Manga”), written by a “Henry Yoshitaka Kiyama,” and when I paged it and looked at it, I was stunned. It was a hardback “comicbook” of 112 pages, with a faded sketch of four young Japanese men on its dusty red cover. Inside, the drawings were in the style of the famous early 20th century American newspaper cartoonist, George McManus, but the dialog was bilingual, hand-written in now-archaic Japanese with some broken English. And the place of publication was not Japan, but San Francisco, 1931. I had accidentally stumbled across a rare history of Japanese immigration in San Francisco, and one of the first modern, autobiographical “comic books” or “graphic novels” ever published in America—by a Japanese immigrant.

Eighteen years later I finally translated it into English.  It was one of the most difficult but gratifying projects I have ever worked on. The story is set in the insular and segregated Japanese immigrant community of early 20thcentury San Francisco. So to understand the context I had to learn about both that history and about the author, Henry Kiyama. It took a great deal of sleuthing, but I found that Henry had been a portrait painter. And through a circuitous and serendipitous process I discovered that in Japan the Yonago City Museum of Art had some of his oil paintings, and even the original art for his comic. Moreover, Henry had been born and died in the nearby village of Neu, on the property where his daughter and her family still lived. 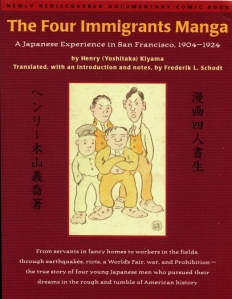 In 1998, Peter Goodman and Stone Bridge Press published my translation under the title of The Four Immigrants Manga: A Japanese Experience in San Francisco, 1904-1922. While never a “best-seller,” it is an important history of both comic books and early Japanese-American immigration, today often used as a teaching aid. In 2000, it was a finalist for the USA Pen/West translation award. The book has also changed my life, for I have developed deep connections with three generations of Kiyama’s descendants in Japan. Today, in front of the train station in tiny Neu, there is also an impressive monument to Kiyama and his work—the only place in the world where my own name is carved in stone.

A few years ago a rising-star Korean-American playwright and composer named Min Kahng discovered my translation in a second hand bookstore. He was inspired, and the result, in 2017, was The Four Immigrants: An American Musical Manga, directed by Leslie Martinson and staged at the Lucie Stern Theatre in Silicon Valley. The highly entertaining production won standing ovations and a raft of awards. For me, for Henry’s granddaughter and her husband (who had traveled from Japan), and for an audience of Americans nearly all of immigrant descent, it was profoundly moving. 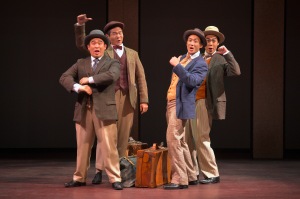 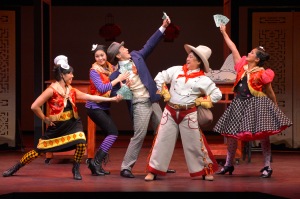 Frederik L. Schodt is a veteran writer, translator, and conference interpreter based in the San Francisco Bay Area. He has written numerous books about Japanese history, technology, and popular culture, and translated numerous novels and non-fiction works. He is perhaps best known for his translations and work related to manga, or Japanese comics, which is sometimes said to have triggered the current popularity of manga in the United States. He has won numerous awards, including, in 2009, the Order of the Rising Sun, Gold Rays with Rosette, for his work in the introduction and promotion of Japanese contemporary popular culture in the United States of America.   His website is at http://www.jai2.com.