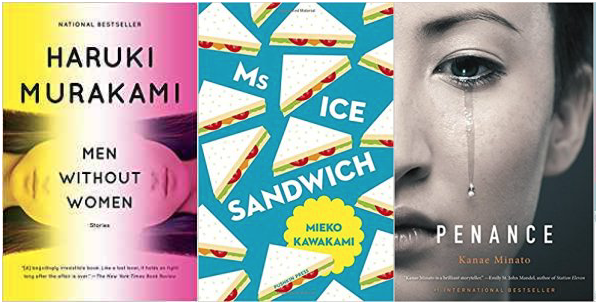 May GLLI Blog Series:  Japan in Translation, No. 13

Editor’s note:  Today begins the second installment of Smithsonian BookDragon Terry Hong’s current favorites in Japanese translated fiction.  It’s interesting though perhaps coincidental to note that five of Terry’s nine recommendations were written by women, and seven of the nine were translated by women.  I point this out in the wake of an article in The Japan Times this past weekend that suggests that the contributions of female Japanese writers have been far overshadowed, particularly abroad, by that of their male counterparts. To address that imbalance, The Japan Times is beginning a series spotlighting female Japanese writers the third Sunday of the month, starting in June.

For Haruki Murakami aficionados, reading Men Without Women, Murakami’s 20th book to be translated into English, is a whimsical delight. The seven stories in his fourth story collection present another captivating treasure hunt of familiar Murakami motifs – including cats, jazz, whiskey, certain cigarettes, the moon, baseball, never-named characters, and – of course – the many men without women. Two of Murakami’s regular translators (because he has them) effortlessly enable his prose for Anglophone groupies: Philip Gabriel, who most recently translated Colorless Tsukuru and His Years of Pilgrimage, and Ted Goossen, Murakami’s newest polyglot, who translated The Strange Library. Their seamless partnership is unmistakable. Who translates which story remains unknown until story’s end when a name is revealed. Despite so much seeming to be the same, rather than familiarity breeding contempt, Murakami always manages to entertain, surprise, and satisfy. If Murakami is in the (repeating) details, then such details are what make his writing so identifiably unique. “Maybe working on the little things as dutifully and honestly as we can,” a character muses, “is how we stay sane when the world is falling apart.” Sanity might be overrated, but Murakami surely is not.

Fourth grader he may be, but our narrator is quite the sharp observer of his surroundings. His father is dead; his mother runs a “fortune-telling and that kind of stuff” salon. She’s often the recipient of his unguarded bluntness: “If video games make you stupid, then what do mobile phones make you?” The pair live with his paternal grandma who, despite her silent immobility, is his closest companion. Family aside, the eponymous Ms Ice Sandwich is the one person who gives him “that feeling you get when you swallow rice without chewing it properly first” – and that’s a good thing. Naming her for her position behind the sandwich counter at the local store, he can contentedly stare at her “great big eyes” enhanced by her “ice-blue eyelids.” And then he overhears three girls in his class dismiss his beloved as “such a freak,” triggering unexpected, disturbing reactions that require a rebalance of his young life. Japan-based Louise Heal Kawai translates Mieko Kawakami’s whimsical novella into British English as part of the London-based indie Pushkin Press’s Japanese novella series. Described as Haruki Murakami’s “favorite young novelist,” Kawakami is destined to charm Anglophone audiences as well.

Kanae Minato is two for two for twisted psychological Japanese noir. What she did with deadly milk cartons in Confessions made quite the debut splash. She goes back to school in Penance (expertly rendered into English by lauded translator Philip Gabriel) in which 10-year-old Emily is raped and murdered on school grounds. The four friends who find her corpse are expectedly traumatized – but three years later, any semblance of recovery is irreparably destroyed when Emily’s mother invites the quartet for tea and fancy cakes, only to threaten the girls: find Emily’s murderer before the 15-year-statute of limitations or risk revenge – “I’ll make you suffer far worse than Emily ever did.” Twelve years pass, the 15-year expiry looms, and the girls – now young women – reveal the horrifying penance they’ve each performed.

Making and selling dorayaki – a pancake-like pastry filled with the eponymous “sweet bean paste” – was not supposed to define Sentaro’s life. His someday-dreams of becoming a writer got waylaid by bad decisions that resulted in a two-year prison sentence. Since getting out, he’s been repaying his debts as the dorayaki shop’s only employee – until 76-year-old Tokue answers the “Help Wanted” notice. Sentaro’s initial protestations disappear after he tastes Tokue’s homemade sweet bean paste, and she quickly becomes the shop’s best asset. But Tokue has a secret past – which eventually causes her to quit, but not before customers are scared away by their own unfounded fears of her appearance. Tokue’s got to keep teaching Sentaro important lessons about listening and learning before it’s too late. Inspired by the 1996 repeal of Japanese legislation that for more than a century inhumanely confined patients with Hansen’s Disease (leprosy) – and their families, Sukegawa – enabled by Watts’s lucid translation – tells an endearing, thoughtful tale about relationships and the everyday meaning of life.

Terry Hong created and maintains Smithsonian BookDragon, a book blog for the Smithsonian Asian Pacific American Center. She co-directs the Walter Awards for We Need Diverse Books. She was the writer wrangler for the film Girl Rising. She taught for Duke University’s Leadership in the Arts in NYC. She co-authored two books, Eastern Standard Time: A Guide to Asian Influence on American Culture from Astro Boy to Zen Buddhism and What Do I Read Next? Multicultural Literature. She reviews extensively for many publications. Follow her on Twitter at @SIBookDragon.