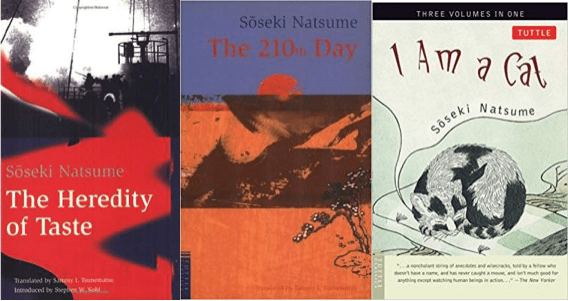 May GLLI Blog Series:  Japan in Translation, No. 10

Part of the joy of reading literature in translation comes from discovering new voices and enjoyable writing, and without the actual translator that wouldn’t be possible.  The words we read come not from the writer but their foreign-language representative: Yoko Ogawa’s sinister prose is really that of Stephen Snyder, and Michael Emmerich recently brought Yasushi Inoue’s wry style into English. At times, of course, the task is shared, as is the case with Haruki Murakami.  With a large back-catalogue (and many impatient readers and publishers), Jay Rubin, Philip Gabriel and Ted Goossen have managed to share the load, without any discernible drop in quality.

However, for the biggest name in ‘modern’ Japanese literature, Natsume Sōseki, the path into English hasn’t been quite as smooth.  As I look through my collection of his work, occupying a whole shelf of my personal J-Lit library, a worrying trend emerges.  Over the seventeen works of fiction, one work of non-fiction and the two extracts from longer works featured in anthologies, I managed to count a grand total of twenty-two names – which is interesting, to say the least.  While it’s obvious proof of Natsume’s appeal that so many gifted translators (and there are several of the field’s biggest names included here) are willing to bring the writer’s work into English, it does pose a problem for the casual reader: what is Natsume Sōseki’s true style, and is it really coming across in English?

I’d have to say that I have a few doubts about that as there are some rather stilted efforts among those I’ve tried.  Two books translated by Sammy I. Tsunematsu (The Heredity of Taste and The 210thDay) seem particularly heavy-handed in terms of translation, with some pompous, unnatural speech.  This is a shame, especially for the latter work, a brief, light-hearted story of two men on a pilgrimage to a volcano (with touches of Jerome K. Jerome’s Three Men in a Boat).  Another example is Natsume’s first major work, I am a Cat.  While overall it’s an enjoyable read, there is a slightly unnatural feel at times to Aiko Ito and Graeme Wilson’s work.

These books stand out because of the more impressive effect made by other early works.  Meredith McKinney has done an excellent job on Kusamakura, the story of a man’s journey into the mountains, as has Jay Rubin with Sanshiro.  This sensitive take on a young man from the provinces at the mercy of the big city is a novel showing the best of the writer’s style.

Of course, it’s important to be careful when making judgments without recourse to the original text, but there were a couple of pieces I was able to compare thanks to differing versions in English.  Matt Treyvaud’s recent translation of Ten Nights Dreaming allowed a comparison with one of these vignettes, which was included in The Oxford Book of Japanese Short Stories in Ito and Wilson’s translation.  While the versions are similar in content, they are rather different in style, and on the whole, Treyvaud pulls it off more skilfully.

Another example comes from one of the first Natsume books I ever read, Botchan, the raucous story of a young teacher in a new environment.  It’s a true Japanese classic (a high school staple), and great fun, even if I was initially a little disappointed with J. Cohn’s version (a very American take on the tale).  A few years later, I tried Burton Watson’s version of the first chapter, included in Donald Keene’s Modern Japanese Literature anthology.  Surprisingly, the crazy kid of Cohn’s text had morphed into a more solemn, pompous voice, giving me a far greater appreciation for Cohn’s work…

So, is the voice all down to the individual translator, then?  Not quite. While Natsume had a relatively brief writing career, cut short by an untimely death, his style evolved considerably from the carefree satire of I am a Cat and Botchan to the nuanced psychological novels of his final years, such as Grass on the Wayside and his unfinished final work Light and Dark.  None of his books are entirely devoid of the trademark humour, but the more he developed as a writer, the darker and subtler these moments became.  With the writer’s protagonists evolving from helpless young students to even more helpless old men, it’s unlikely that his style could remain unchanged.

For the native speaker (or the fluent foreigner), part of the enjoyment of reading Natsume Sōseki’s work will undoubtedly come from watching this development in the style and themes of his writing, but those of us with less of an affinity for kanji must thank the translators who bring his texts to us, while remaining mindful that the approach taken may contain a little of the translator mixed in with the writer.  Yes, it’s gratifying that so many people are willing to spend time on providing access to Natsume’s work, but in a way, it’s a pity that his body of work is so fragmented in English, spread between so many translators and over so many publishers.  If only there were a move to create a collected works, with one publisher coordinating a small team of hand-picked expert translators to help the writer finally obtain the acclaim in English he deserves…

…but that’s a story for another day.

Tony Malone is an Anglo-Australian reviewer whose site, Tony’s Reading List, specialises in reviews of fiction in translation.  He has a particular interest in Japanese and Korean literature, and his work has appeared at Words Without Borders, Asymptote and Necessary Fiction.  He also has a keen interest in translation and was one of the thirty-seven translators contributing to the English version of Véronique Côté and Steve Gagnon’s I Never Talk About It, released by QC Fiction in 2017.

David Jacobson organized this series on Japanese literature in translation. He is author of Are You an Echo? The Lost Poetry of Misuzu Kaneko, a 2017 NCTE notable poetry book. A longtime journalist, David has written news articles and TV scripts that have appeared in the Associated Press, The Washington Post, The Seattle Times and on CNN and Japan’s NHK. Since 2008, he has worked with Seattle book publisher Chin Music Press. An experienced Japanese translator, he is on the board of the Global Literature in Libraries Initiative.