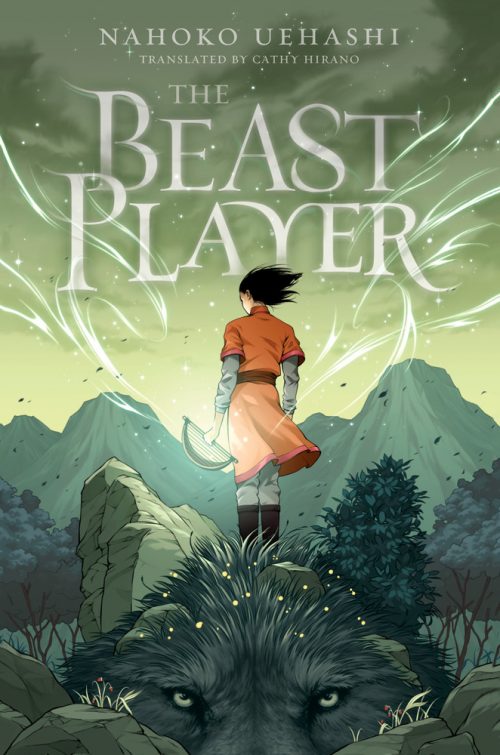 What do you do when what you feel is right, is seen by others as a sin?

This question forms the heart of The Beast Player, a riveting YA fantasy series by Nahoko Uehashi, translated from Japanese by Cathy Hirano. The first volume is on shelves in the U.K. and available for preorder in the U.S., due out in March 2019.

More on The Beast Player in a moment.

First, DID YOU KNOW that the Marie Kondo catchphrase “spark joy” is the work of the same Cathy Hirano, a brilliant Canadian wordsmith who’s spent her adult life in southern Japan?? She never expected her translation of The Life-Changing Magic of Tidying Up to become a hit for Ten Speed Press—and her name does not appear on the book’s cover, now seen everywhere from Netflix to The Late Show with Stephen Colbert.

But check this out: Hirano took the word tokimeku, whose literal renderings might include palpitate, flutter, or pound, as in a heart a-skitter, and made a phrase that accomplishes in English what tokimeku does in Kondo’s book. In fact, Hirano made several phrases because she had to avoid repetition per the norms of written English. This is what literary translators do: they read a work, experience it in the original language, and then render (almost perform) it in a new one so it inspires readers the same way.

It is so much more than going to a dictionary.

We should all be fanpersoning the translators of great authors, as we admire recording artists in addition to songwriters.

Now, back to Cathy Hirano. She has been translating since before KonMari’s birth. A veteran freelancer based in the city of Takamatsu, she has worked with texts in a wide range of fields, from anthropology to medicine to engineering. Amazingly, she has also translated several acclaimed children’s and YA books. In 1997, her translation of the realistic middle grade novel The Friends by Kazumi Yumoto won both the Boston Globe–Horn Book Award for Fiction, and the American Library Association’s Batchelder Award, a prize for #worldkidlit conferred alongside the Newbery and Caldecott. In 2008, another Batchelder Award garlanded her translation of the YA fantasy Moribito: Guardian of the Spirit by Nahoko Uehashi—and in 2009, a Batchelder Honor went to her rendering of Uehashi’s Moribito II: Guardian of the Darkness. Hirano became one of few translators to produce multiple Batchelder titles in different genres.

Now, after a wait of nearly a decade, North American readers can look forward to a new Uehashi/Hirano series in The Beast Player. For this work, the initiative to publish a translation came from Pushkin Children’s in the U.K.; Holt Books for Young Readers subsequently purchased rights for North America.

The Holt edition has Hirano’s name on the cover.

ALL HAIL THE CREDITING OF THE TRANSLATOR, WHICH SHOULD BE A GIVEN INDUSTRY-WIDE PER THE AUTHORS GUILD AND PEN AMERICA!

At times, illustrators must fight for credit due to not being authors, and translators face the same issue. It affects their careers. Translators help us read world authors at a time when nativism perniciously infects society. Don’t support America First? Reflect that by buying world reads and remembering to #namethetranslator, because there is just so much work to do.

But back to The Beast Player. I love this book! Let me count but a few reasons.

The heroine first appears at age ten but lives most of the story from age fourteen. An execution scene near the beginning, as well as scenes of natural predation, make The Beast Player a YA-and-up read. Its combination of themes and gradually building momentum will lend it appeal to a wide cross-section of readers, including those not often drawn to animal books—as I am not. If anyone can rivet readers to a scene of checking dung for clues to an ailment, it is the incomparable Nahoko Uehashi and Cathy Hirano.

An excerpt in parting, from the Pushkin Children’s edition, p. 485:

“I know what my mother, and what you, too, call a ‘sin’ . . . I can understand that you have made tremendous sacrifices and adhered to the law to avert disaster. But I despise the way you use the word ‘sin’ to manipulate others.”

Feelings locked deep inside her suddenly rushed from her mouth as if a dam had been broken. “You use that word to paralyze the mind, just like we use the Silent Whistle to freeze the Beasts and Toda. I can’t bear to see people bind others like that.”

A gray-hooded man stepped forward and placed a hand on her grandmother’s shoulder. “Let us go,” he said in a low voice. “There is no saving her.”