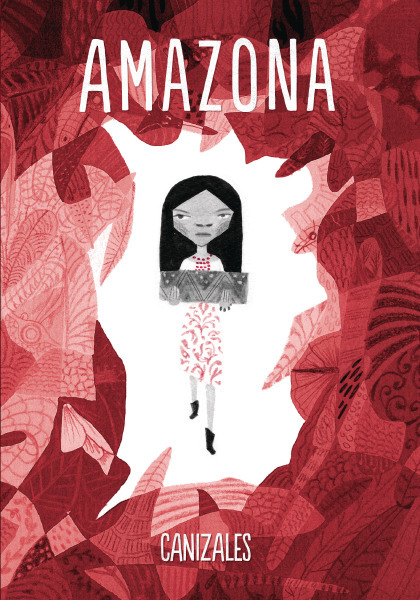 While most of the Amazon rainforest is found within the borders of Brazil, other South American countries such as Peru and Colombia lay claim to portions of its acreage. The Amazon itself is home to hundreds of indigenous people groups, who find themselves increasingly displaced from their ancestral homes, or even killed, because of mining, agriculture, and development. In Colombia, the decades long armed civil conflict has been an additional factor in the displacement of indigenous peoples from the Amazon region.

This is the background of the young adult graphic novel Amazona. Published just this year by Graphic Universe, Amazona is the story of a 19 year old Andrea, an indigenous woman who has been displaced with her entire community to Cali, a city on Colombia’s Pacific coast. There is not enough food to go around, and quarters are cramped. Andrea thinks back to her life in the forest: she and her husband lived with their infant daughter amongst an extended family, surrounded by the trees, flowers, and water of the Amazon. The only thing in that house now, she laments, is “what the bullets have written across it: desolation.” Can she go back home? Can she right a grievous wrong?

Andrea sets off, back to her village. Traveling for days by bus, van, boat, and on foot, she arrives at the place where she is from, where she can “feel the energy of the earth once again.” She is here to fulfill a dual mission. One is to bury her infant daughter in her ancestral lands. Andrea carries her body in a decorated box she holds close to her chest, resolve in her eyes as she confronts the armed guards stationed at the mine now operating in her village.

The other is to gather concrete evidence of illegal activity by the mining company who displaced her community. She takes photographs, and gathers soil samples. There are twists in the story, and help from unexpected sources. The threat of both physical and sexual violence is ever present (and depicted in the artwork in a non-graphic yet chilling manner). Will Andrea finish what she set out to do?

Written and illustrated by Colombian born artist Canizales, Amazona is a taut thriller of a text. For older readers (grades 9 and above, or ages 14 and above), this is a true-to-life graphic novel that sheds light on the material conditions of indigenous peoples in Latin America. It would fit in beautifully with a larger study of contemporary indigenous sovereignty, water protectors, and other movements. Sofía Huitrón Martínez’s translation from the original Spanish adroitly weaves both the present day action and flashbacks Canizales presents in his book. This text deserves to be widely available in both public and school libraries.

Written and illustrated by Canizales

You can purchase this book here.*

Find this book at a library.

Klem-Marí Cajigas has been with Nashville Public Library since 2012, after more than a decade of academic training in Religious Studies and Ministry. As the Family Literacy Coordinator for Bringing Books to Life!, Nashville Public Library’s award-winning early literacy outreach program, she delivers family literacy workshops to a diverse range of local communities. In recognition of her work, she was named a 2021 Library Journal “Mover and Shaker.” Born in Puerto Rico, Klem-Marí is bilingual, bicultural, and proudly Boricua.