My cousin Egidijus Lisauskas put his hand on the book, hesitated for a moment, and then pulled it off the shelf and put it into my hands. It was 1997, we were standing in a bookstore in Vilnius, and I had asked for something to read to improve my Lithuanian, explaining that all I could find to read in America was children’s fairy tales, and I was getting rather tired of them. I’ve thought about that momentary hesitation of his many times, and I’m still not sure what it was about.

The book was Kazys Boruta’s classic Baltaragio malūnas (Whitehorn’s Windmill, CEU Press, 2010), and it turned out to be the very book that set me off in midlife on to what would become my third career, as a literary translator. I suppose on one level the book can be seen as what marketers in America call “young adult,” and so for that reason was a good choice for a novice. On the other hand, the story touched so many themes I recognized as a part of my Lithuanian heritage that I was immensely beguiled. There is, for starters, the lyricism of Boruta’s language, easily perceptible despite my limited knowledge, and a story that incorporates Lithuanian folklore. But there was also a certain irreverence, a wicked sense of humor, a deep feeling of connection with nature, and a keen perception of things beyond the ken of human knowledge. Above all was the deep sense of tragedy, of human helplessness in the face of impending doom. Perhaps that was what touched me, as a recent widow, the most: the theme of love’s failure to save even our dearest ones from danger spoke directly to me.

There was reason for Boruta to be feeling impending doom as he was writing this book. The year was 1942; Lithuania had been under Russian occupation, and was now under the Germans. As a leftist before the war, Boruta had been in a great deal of trouble with Lithuania’s interwar government, but had quickly gotten himself into trouble with the Bolsheviks as well. He had also just lost his wife to a sudden brain infection. He managed to escape imprisonment under the Germans by pure luck, despite various activities, including working to save Lithuanian manuscripts from destruction and assisting Ona Šimaitė in her support of the Jews of the Vilna ghetto. Baltaragio malūnas was published in 1945, just in time for the Soviets to return, declare it unacceptable literature for the “new Soviet man,” and remove it from the bookstores. Boruta did continue to write and translate despite another long imprisonment and his rejection by the Soviet powers, but it had its effect on his health. He passed away in 1965 at the age of sixty.

It was in the hope of translating this book for my son—who had no knowledge of Lithuanian at all—that I began work on it, quickly discovering just how difficult, but intriguing, a task translation is. Four years later, the opportunity arose to return to school at the University of Illinois for a master’s degree in Lithuanian language and literature, and I was on my way.

It was at the University of Illinois that I encountered the book which would become my second major translation, that of Ričardas Gavelis’s Vilniaus pokeris (first published by Open Letter in 2009). Explaining what most attracted me to this book is considerably more difficult, outside of the obvious point, that a masterpiece like this was crying out for translation. The first time I read it, despite my still-limited vocabulary, I was unable to put it down, and stayed up most of the night, only to wake up from a nightmare after a few hours of sleep. Each of the four narrators has been psychologically crushed in a different way, and each expresses it differently. In some sense it represents an alternative universe to the one I grew up in, a universe that could have been mine if my parents had failed to escape to the west during the Soviet march to Berlin. It’s a gruesome and difficult book, but there’s humor in it, too, although it’s about as black as it gets.

Gavelis was born in Vilnius, and studied theoretical physics at Vilnius University. This background in physics finds its way into all of his novels; in Vilnius Poker it is especially clear in the first narrator’s fascination with time, which he claims at one point to have stopped. After graduation, Gavelis worked for several years in the physics department of the Lithuanian Academy of Science before realizing in 1978 that his calling was to be a writer. In the next ten years he worked in the editorial department of various publications and published three collections of short stories. In the meantime, however, he was writing Vilniaus pokeris without any expectation that it could ever be published. But the winds of change blew through the Soviet Union, and when the book was at last published in 1989 it created an enormous sensation. To this day, readers seem to either hate it or love it, but no one seems to remain indifferent. That the English translation was long-listed for the Best Translated Book award in 2009 and the 2015 French translation earned glowing reviews there as well is a testament to its continuing relevance. 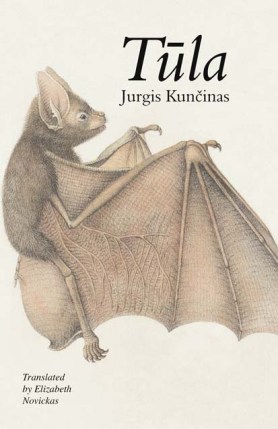 My next major effort was another modern classic, Jurgis Kunčinas’s Tūla.This story of hopeless love also covers a good chunk of the Soviet period in Lithuania, and is especially full of references to popular culture of the time and various locations in Vilnius; I had a fascinating time exploring them through the internet. For a time I considered producing an illustrated edition containing Soviet-era photographs of the places mentioned. Perhaps I will do that yet. Coming from a family that has had its problems with alcoholism, the narrator’s struggle with this weakness again had a personal resonance for me, although certainly no one in America has experienced anything like the “Drunkard’s Prison” described here. Magic realism, another theme that plays a role in all the books I’ve mentioned, forms a distinctive part of this novel: at times the narrator imagines himself as a bat, flying out of the prison at night to visit his love. The humor here is more of a wry variety.

Kunčinas was an extremely prolific poet, writer, and translator, but like all the writers I’ve mentioned died young, at the age of 55, and just a few months after Gavelis. They are buried next to each other in Vilnius’s Antakalnis Cemetery. Kunčinas has since had the public library in his hometown and a literary prize named after him.

There are some common themes in the works I’ve selected to translate; probably some of them are common to a number of Eastern European cultures, and some more specifically to Lithuania, but certainly all of them contain threads that are common to all humans, wherever they may be on this earth. Those common threads are what I look for in a work I choose to translate, and that I hope my work will convey to the English-speaking reader.

Elizabeth Novickas has worked previously as a graphic designer and a computer system administrator. She has been awarded a translation grant by the National Endowment for the Arts and won the 2011 St. Jerome Award from the Lithuanian Translator’s Association. She is currently working on translating another novel by Ričardas Gavelis, Sun-Tzu’s Life in the Holy City of Vilnius, due out in April 2019 by Pica Pica Press.

Click on the book covers if you’d like to purchase them or simply take a closer look!