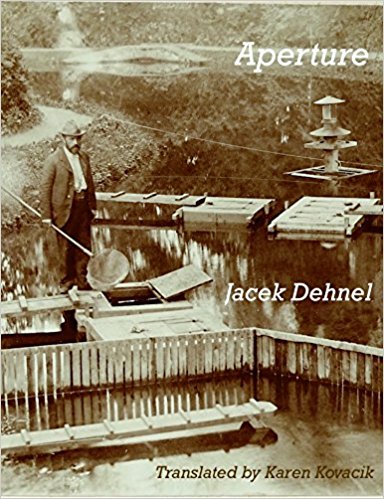 Here grass and epoch find fulfillment.
The hands of a rabbi. A deer. Menorah.
scroll and lion of Judah, and sails of a ship.
Beneath the sod the tsaddik’s pupils sit,
reading delicate letters of gravel and pebble
from the eternal book of the earth.
Names of bygone people, prior days and things
echo softly in their arid skulls.

Later the whispers of those reading will go silent,
and in that moment the voice of a trumpet,
forged from a cloud, will resound over the plain.

The lion topples the lit candelabra,
and fire touches the smooth grain of the Torah.

Clearing, pond, ice-hole—concentric rings:
the hole glazed with wafer-thin, fresh ice.
Here, you observe. Here, on your knees,
eye to the icy pane, observe and believe
in others: ovoid, slippery, cold-blooded, bottom-fed.
And they, too, will see the unfathomable:
a circle darting silently, some creature
with winter coloring, looming with his young.
Here, you observe. Here, head tilted,
one species studies another: its moves not fluid,
eyes strangely squinted, gnarls on its fins.
Three concentric rings: dark glade, pond, a hole in the ice.

Author
Jacek Dehnel is an award-winning Polish poet, novelist, and translator. In 2005 he was one of the youngest winners of the Kościelski Prize for promising new writers. He’s the author of eight volumes of poetry and fourteen of prose, most recently two volumes of historical crime fiction co-written with Piotr Tarczyński. His 2013 poetry collection Języki obce [Foreign Languages] was a finalist for the Szymborska Award, and five times he has been nominated for the Nike Award, Poland’s most prestigious literary prize. He has translated F. Scott Fitzgerald’s The Great Gatsby, Henry James’s The Turn of the Screw, and Philip Larkin’s Collected Poems into Polish. Dehnel lives in Warsaw.

Translator
Karen Kovacik translates contemporary Polish poetry. She brought into English Agnieszka Kuciak’s Distant Lands: an Anthology of Poets Who Don’t Exist (White Pine, 2013), longlisted for ALTA’s National Translation Award, and is the editor of Scattering the Dark (White Pine, 2016), an anthology of Polish women poets. She has received a fellowship in literary translation from the National Endowment for the Arts and a Fulbright Research Grant to Poland.

One thought on “Excerpt: Aperture by Jacek Dehnel”