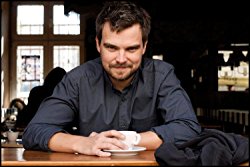 Raphael’s masterpiece, Portrait of a Young Man, has been missing from a Kraków art gallery since the Second World War. Art historian Zofia Lorentz, art dealer Karol Boznański, special services Major Anatol Gmitruk and Swedish art thief Lisa Tolgfors have been teamed up and commissioned by the Polish government to steal the painting from a private collection on behalf of the Polish nation. But while trying to carry out this unusual mission, they realize that someone is determined to kill them.

In this scene, they’re caught up by their pursuers while consulting Lisa’s ex-lover, Swedish art expert Sten Borg, at his house on a remote island in the Stockholm archipelago, at the dead of winter.

The laboratory had no windows, so they ran back into the study, and gathered by the desk below the window. Through the swirling snow they could clearly see three rapidly approaching headlamps, only a couple of hundred feet away from Borg’s house.

“What’s that?” asked Karol. “Snowmobiles? ATVs? Are you expecting visitors?”

Suddenly something struck the window with great force. A normal window wouldn’t have withstood the impact, but this one was reinforced, burglar-proof. The can bounced off the window and struck the ice, bounced again, and exploded with a dazzling white flash, all too familiar to Anatol. Zofia averted her gaze, and when she looked through the window seconds later, she saw an unusual scene. Instead of the flash, a pool of alarming, very bright fire was spreading, melting the sheet of snow and the layer of ice beneath it. In a second, the flames had dissolved the thick ice and sunk into the Baltic Sea. But still they went on burning, illuminating the ice from below, changing from white to pale green, then dark green, like fireworks jammed into a green glass bottle.

“An incendiary grenade! We have to get out of here!” shouted Anatol, and pushed Zofia toward the exit. She ran without hesitation, the car keys in the pocket of her jeans.

Zofia and Karol raced down the stairs—their lives depended on it. Anatol mentally cursed that the wine and good food had made him drop his guard, leaving his gun in the jacket hanging by the door downstairs.

“Get to the car! Now!” he shouted in Swedish at Borg and Lisa.

But instead of escaping, they were messing with a wall opposite the window, where there must have been a secret closet behind the bookcase. Borg was urgently trying to save something hidden in there, while Lisa did her best to pull him away.

“It’s not worth it!” she screamed in Swedish.

“It’s worth everything!” he cried. “Everything! Nothing is worth more than beauty. If you don’t realize that, what the hell have you been doing with me all these years? What the hell, Lisa?”

Anatol shook his head in disbelief. He grabbed Lisa and dragged her toward the stairs just as Borg managed to open the secret closet. First he took out something small, which he threw to Lisa. Then he reached deeper and pulled out a painting about three feet by two feet. It showed some children picking poppies in a field on a cloudy day, with a river, a small town, and a dark sky in the background, all of it fuzzy, painted with short brush strokes, techniques that even Anatol recognized as Impressionist.

He was thinking fast—his military instinct switched on. He wanted to act, he wanted to save himself and the others and take them as far as he could. Staying in a wooden house being bombarded with incendiary grenades was suicide. But still Anatol’s brain mapped the poppies filling the lower half of the painting—masses of small red strokes, poppies that came to life thanks to the genius of Claude Monet. Flowers stirring in the wind, little flames anxiously watching the stormy sky.

“Leave it! Please, Sten, I beg you!” screamed Lisa, struggling in Anatol’s grip.

Borg rushed toward them, then there was a burst of gunfire. The window may have been burglar-proof, but it wasn’t bulletproof. A shower of glass sprayed across the study.

Terrified, Borg fell to the floor and cowered behind the Monet, as if the canvas could save him. And by some miracle it did. The gunfire stopped, the study full of holes, but neither the canvas nor Borg had been scratched. He adjusted his glasses and smiled impishly.

Just then an incendiary grenade flew inside, bounced off the wooden floor and exploded. Burning thermate clung to everything in its path—the floor, walls, desk, bookshelf full of albums, the Monet Ronia had stolen in Zurich, and Sten Borg, the art lover, missing masterpiece hunter, Lisa’s first lover, and owner of a twelve-acre island.

The pound of thermate contained in the grenade was burning at a temperature of four thousand degrees. Enough for the thin canvas with the red poppies to cease to exist in a flash. And the same thing happened to Borg’s skin, but it wasn’t enough to kill him.

Anatol dragged the screaming Lisa down the stairs to run from the hellish temperature and flames. But most of all to get away from the ghastly, inhuman screaming as Borg’s body boiled, burned, and dissolved.

The power of art is tremendous. The image of the field of red poppies would remain with Anatol for the rest of his life.
Published with permission from AmazonCrossing

Author
Zygmunt Miłoszewski is Poland’s #1 bestselling novelist as well as a screenwriter. His trilogy of crime novels featuring prosecutor Teodor Szacki—Entanglement, A Grain of Truth, and Rage—has received international recognition, making him one of the world’s best-known contemporary Polish writers.

Miłoszewski has won the Polityka Passport for Polish literature. He is also a two-time winner of the High Calibre Award for the best Polish crime novel, and he has earned two nominations for the French Prix du Polar Européen for the best European crime novel.

Translator
Antonia Lloyd-Jones is a full-time translator of Polish literature. Her published translations include fiction by several of Poland’s leading contemporary novelists, including The Last Supper by Paweł Huelle, for which she won the Found in Translation Award 2008. Her translations of non-fiction include reportage, literary biographies and essays. She also translates poetry and books for children, including illustrated books, novels and verse.

Priceless
Zygmunt Miłoszewski
Translated from the Polish by Antonia Lloyd-Jones
May 2018, AmazonCrossing
ISBN: 978-1503941434