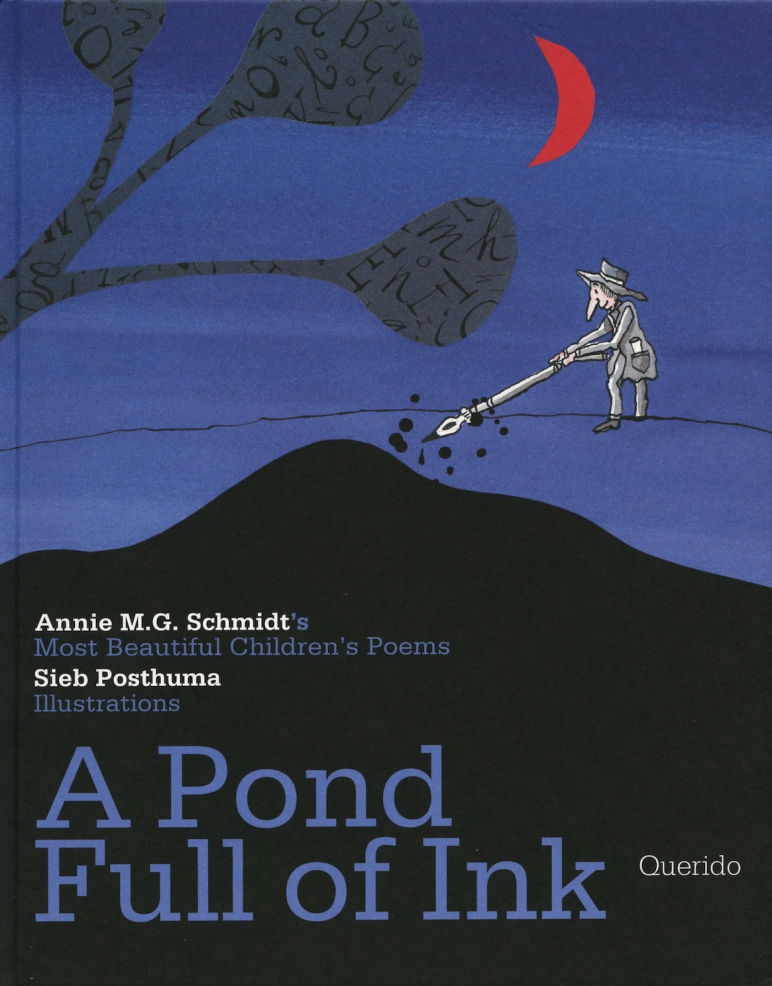 The Man Who Writes Fairy Tales has run out of ink. Luckily for him, there is a pond full of the rich black stuff at the foot of his garden where he can go to fill up his pen whenever inspiration strikes: “He’s made up ten thousand stories already / and has plenty more — he’s constant and steady. / And if he keep writing till the day that he dies, / perhaps he’ll have written that pond of his dry:”

As if written with that magical ink, brightly illustrated poems starring Schmidt’s favorite types of naughty children and frustrated parents burst into view. Soon there are kings and queens, fairies and elves, giants and witches, dragons and spiders, in a parade of joyfully silly situations and predicaments with a manic, slightly psychedelic 70s vibe. Although as inventive, nonsensical, and hilarious as verses by Roald Dahl, Shel Silverstein, or Jack Prelutsky, Schmidt’s poetry, hugely popular in the Netherlands, had never been translated into English during her lifetime. In fact, the translation of A Pond Full of Ink was published almost 20 years after Schmidt’s death, “the first time that a collection of verses with the Dutch illustrations…was published abroad.”

Schmidt’s translator David Colmer works his poetic magic here, first with a British English edition and then a couple of years later tweaking or “rejigging” them for a new American edition, brilliantly unpacking the original Dutch rhymes and rhythms, recreating them so that the poems have an English life of their own. The wit and mischievous antics of Schmidt’s wildly imaginative characters take center stage as they snap at everyone around them, feed their crocodiles, listen with their whim-wham ears for little children misbehaving, dress up their camels, move into tree houses, or simply refuse to get clean like Belinda Beronda:

Every child and every parent can immediately relate to Belinda’s outrage and her mother’s exasperation. This is the beauty of Schmidt’s sly creativity, the irrational, obstinate child and the parent who has reached their limit are equally involved and responsible for the chaos that ensues. The combination of text and illustrations here by artist Siep Posthuma are inventive above and beyond the details in the poem, his Belinda Beronda is crowned with medusa-inspired tentacled hair over which spiders create their webs and flies buzz, and the pages are peppered with black watercolor droplets, capturing the essence of the “grimy smudges all over her face”:

Posthuma won the 2012 Gouden Penseel illustration prize for the best Dutch children’s book for his illustrations, and no doubt provided further encouragement for bringing the book to a larger, international audience. Kirkus Reviews in their starred review, “Between the ravishingly well-crafted verse, with its tight meter and lithe rhyme, and Posthuma’s stark, richly layered mixed-media illustrations, readers can spend hours savoring each page.”

I certainly have spent some wonderful moments with Aunt Sue and Uncle Steve’s treehouse, branches where children chase each other, platforms and ladders lead to laundry, Uncle Steve in an armchair, a hanging baby buggy: “They sleep up there and eat up there / It’s very cosy, in the air”:

And I had to stop and wonder, is Schmidt just talking about “The Furniture” in this poem, or is there a bigger observation underneath about those who “roam” and those who “stay home”:

Truly, “the more whimsical, the better” applies to A Pond Full of Ink. There is a wonderful booktrailer to share with children too, perfect for poetry units and celebrations for all ages. Here The Man Who Writes Fairy Tales returns at the end of the book, lying contentedly in a hammock strung between two trees under a black, starry sky. The pond is emptied of ink and his pen lies on the ground beneath his bed, the last fairy tale poem written, read, and, most certainly, remembered.

Reviews for A Pond Full of Ink:

School Library Journal’s Elizabeth Bird writes, “Readers who flip through the pages will encounter everything from thieves that covet the moon to a teakettle with musical aspirations. The end result is a collection that is silly, subversive, and sly by turns.”

Selected Awards for A Pond Full of Ink:

Sieb Posthuma won the 2012 Gouden Penseel for his illustrations for A Pond Full of Ink/Een vijver vol inkt.
“The Gouden Penseel is a sister prize to the Gouden Griffel, the prize for the best Dutch children’s book.”

This post may contain affiliate links that earn Global Literature in Libraries Initiative a commission at no extra cost to you.