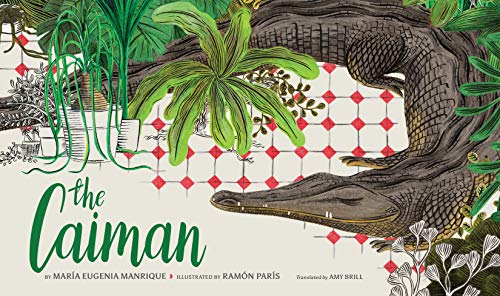 What would you do if you found a baby caiman (a type of alligator)? Would you slip it into your shirt pocket? Unlikely as it seems, that’s what Faoro, a jeweler and watchmaker, did many years ago. The Caiman*, a picture book for ages 5-8, is his story—a real one.

Faoro loved animals and let them wander in and out of his house, which was said to have been filled with them. Indeed, alert readers will spot a number in the illustrations: an iguana, armadillos, a turtle, and parrots.

Faoro adopted the three-day-old caiman and named her Night (Negro, or Black in the original Spanish). He brought Night to work and she followed him everywhere he went. Children played safely with her. And when Faoro fell in love, he made sure that the caiman liked his bride-to-be, Angela, before they got married. Night attended the wedding, of course, her fangs adorned with gold settings the jeweler had made for her.

Over time, Night grew to be ten feet long, continuing to live happily with the couple. When Faoro passed away, Angela and Night were both bereft: the caiman hid and refused to eat. Only when Angela found a note from Faoro and began singing did Night re-emerge, going on to live happily with Angela for another twenty years.

The Caiman tells a simple story, and yet it’s an amazing one. In the back matter, readers discover that author Maria Eugenia Manrique met and rode on Night as a child when she was visiting her family in San Fernando de Apure, Venezuela. What an experience that must have been, one that she has now shared with readers in this delightful, colorful picture book.

The Caiman
Written by María Eugenia Manrique
Illustrated by Ramón París
Translated from the Spanish by Amy Brill
ISBN: 978-1542031585

*Review copy of kindly provided by the publisher.

Award-winning opera singer Nanette McGuinness is the translator of over 60 books and graphic novels for children and adults from French, Italian, German, and Spanish into English, including the well-known Geronimo Stilton Graphic Novels. Two of her recent translations, Luisa: Now and Then and California Dreamin’: Cass Elliot Before the Mamas & the Papas were chosen for YALSA’s Great Graphic Novels for Teens; Luisa: Now and Then was also a 2019 Stonewall Honor Book. Her most recent translations are For Justice: The Serge and Beate Klarsfeld Story, The Sisters #7: Lucky Brat, Chloe & Cartoon, Alter Ego and A House Without Windows, which she also assisted in editing.

3 thoughts on “#WorldKidLit Wednesday: The Caiman”