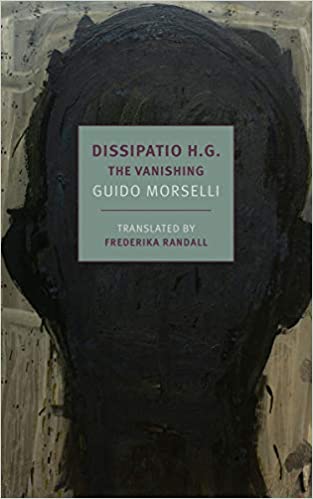 originally published in Italian in 1977

translated from the Italian by Frederika Randall

Dissipatio Humanis Generis: the disappearance of the human race.

This is Guido Morselli’s theme, and it’s explored with all of the seriousness and depth one would expect from a writer so well-versed in Latin, philosophy, psychology, literature, and many other subjects. A journalist and author who committed suicide in 1973, having had none of his manuscripts accepted for publication, Morselli became a literary sensation in Italy just after his death with the printing of those same manuscripts.

Suicide is central to Dissipatio H. G. since the narrator’s attempt to kill himself is likely, and ironically, what saves him from the Event, the Vanishing, or whatever he decides to call the mysterious disappearance of the human race. (Notably, Morselli’s narrator never actually settles on a name for what has happened, though he does seem to favor “the Event.”) Removing himself from the bustling, mercantile city of Chrysopolis, where there are as many banks as churches, hadn’t been enough for the narrator, tired as he was of human greed, desire, jealousy, and all the other vices one can think of. His retreat to a mountain village outside Chrysopolis hadn’t provided the narrator with the peace of mind he wanted, so he decided to enter a cave and drown himself in a pool there.

Contemplation on the edge of the abyss leads to a change of heart, and the narrator emerges from the cave…into a new world. It takes a few days, but he eventually realizes that (except for perhaps a few other hypothetical survivors whom he wouldn’t ever meet anyway), humanity has vanished. There aren’t any bodies in the streets or even any sign as to the cause of the disappearance–except, perhaps, for the loud clap of thunder that occurred as the narrator was exiting the cave, having chosen life.

Quickly enough, animals and birds start returning to the places from which they had long been banished, wandering the streets and eating everything they come across. Cars line the roads and ditches, radios continue to work, and–eerily enough–some machines continue to go through their pre-programmed motions, oblivious to the fact that their human overseers have abandoned them.

Such a situation naturally leads the narrator to contemplate time, history, narrative, community, loneliness, and silence. He wanders the city and surrounding towns, “hearing” the silence of the lack of human activity that almost seems to drown him. He thinks about how such an event is like a chapter break in a book, with his own story as the Last Man an entirely new kind of narrative. Even his previous disgust with human society undergoes a shift, with the narrator finding that the old adage is true–be careful what you wish for. He wished to be alone, and now that he is, the loneliness is so oppressive that it has become tangible.

Such a situation allows Morselli’s narrator to reevaluate how interconnected humans are with one another and how that has determined so much about how we have built our societies and our cities. Alone among the animals and machines, the narrator has become godlike in the sense that the perspective he has on all he sees is unique. He is free to rename everything, build massive pyres of human-made detritus, and start time over at Year 1, if he chooses. And yet, the narrator keeps coming back to his memory of the psychiatrist who treated him years before for anxiety and obsessive compulsive disorder. Realizing that the psychiatrist, Dr. Karpinsky, was his only real friend, the narrator dwells on Karpinsky’s genuine concern, patience, and love for his fellow humans. In contrast to the other characters of the narrator’s memory, Karpinsky stands out as one of the only noble people we meet in the book–and yet Karpinsky himself was killed tragically years before the Vanishing.

Dissipatio H. G. is so much more than just a character’s thoughts as he wanders around looking for another (any other) human being. The situation Morselli creates lends itself–to this reader’s mind, at least–to speculation that the narrator did kill himself and is now wandering in a kind of personalized pergatory. Or perhaps, in a twist of cruel irony, he is simply a character in someone else’s dream (something something Descartes and that high school philosophy class I took twenty years ago something something). Morselli could be working out the same thing that Stanislaw Lem, for instance, explored in his short fiction–i.e. the idea of the individual “giving birth” to a new universe and becoming its god (also see Sturgeon’s “Microcosmic God” and probably a million other stories/novels I don’t know about).

Finally, Dissipatio H. G. has a very Thomas Mann-ian flavor to it, which is basically the highest praise any book will ever get from me. So go read this gem of a story and you can thank me anytime.

One thought on “Speculative Fiction in Translation: Dissipatio H.G.”