My second choice in this section of older women in northern America comes from the Yukon, and is a retelling of an ancient legend celebrating the resilience, fortitude and wisdom of the two old women of the title:  Two Old Women

In its retelling Velma Wallis draws on the complaints one hears about older people today, they have exhausted their usefulness and should stop whining and move over. As their tribe approaches a difficult winter with few resources, the chief and council decide that the Qwich’in People must abandon the two old women who are draining their resources.

So what use are older women anyway is the question here. 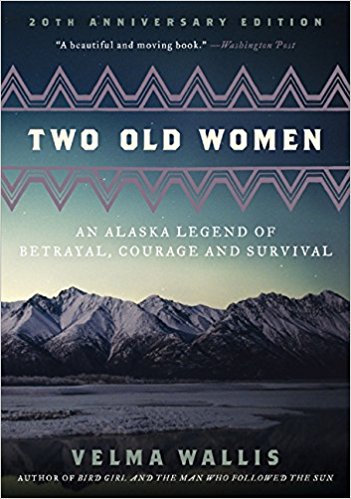 The Story of Two Old Women

It is the time before Westerners arrived in the Yukon. The Qwich’in People must live off what the land provides. Some years the land is more bountiful but this year as the People move to their winter quarters it becomes impossible to support themselves. The chief’s decision to leave the two women behind is a difficult one, but it is argued that these they contribute very little, are a burden on the younger folk and moreover they complain all the time.

Of course they survive but at first they are stunned and shocked. It is hard to be abandoned, especially by your daughter and grandson.

The large band of famished people slowly moved away, leaving the two women sitting in the same stunned position on their piled spruce boughs. Their small fire cast a soft orange glow onto their weathered faces. A long time passed before the cold brought Ch’idzigyaak out of her stupor. (12)

Ch’idzigyaak is 80 years old. Her younger companion is 75. At first Sa’ is the stronger in spirit and body.

At that moment, Sa’ lifted her head in time to see her friend’s tears. A rush of anger surged within her. How dare they! Her cheeks burned with the humiliation. She and the other old woman were not close to dying! Had they not sewed and tanned for what the people gave them? They did not have to be carried from camp to camp. They were neither helpless nor hopeless. Yet they had been condemned to die. (12-13)

It is Sa’ who encourages her friend to hope and then to take action.

“Yes in their own way they have condemned us to die! They think we are too old and useless. They forget that we, too, have earned the right to live! So I say if we are going to die, my friend, let us die trying, not sitting.” (14)

Death would be either from the cold or from hungry wild animals. As winter approaches they set off to find a safe place to shelter, to find food and fuel. As they go they tell each other a little about their pasts, and find that both have been resourceful and have learned survival skills. They support each other to overcome the difficulties.

When they are reunited their survival teaches the rest of the band important lessons about perseverance but also about the value of old folk.

Legends are handed down for a reason. They pass on important lessons from the older generation to the younger. This legend of the old women tells of the importance of not giving up – “let us die trying” – and of the value of different people within a community. It reminds us that old women, even if they are whiners, are not ‘old and useless’, that age does not limit the ability to accomplish what is necessary.

The legend counters the strong story of dependence and decline that old people, especially older women, have told about them even today. Much current social debate assumes that older people have nothing to offer, that they become increasingly dependent, that the world and life belongs to the young.

It is no coincidence that this story is introduced as a mother retelling it to her daughter as they collect the wood for winter. It reminds the reader of the harsh conditions that many people face today. In this short novel these hardships and challenges are made vivid through the author’s personal knowledge of living near the Yukon. The author is from the tribe of the Qwich’in People.