Here is the first book in the August series of Women in Fiction around the world on this blog. I began exploring this theme six years ago. I challenged my blog readers to find me some examples of strongly drawn older female characters. This was the first response Hagar Shipley, from The Stone Angel by Canadian author Margaret Laurence published in 1964. It’s a powerful portrayal, not without humour affection or sharp pain. 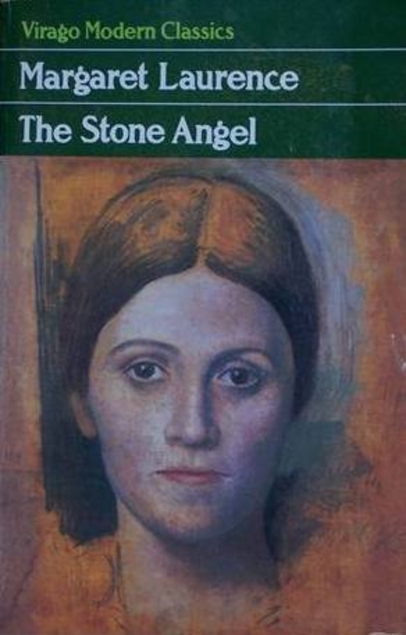 The Stone Angel is narrated by Hagar, her story framed by her situation: an old woman, cared for by her less favoured son and his wife, and becoming increasingly ill, forgetful and always a handful. ‘A holy terror’ is her son’s description. The picture of her decline in old age shocks, even now. The dilemmas for Hagar, her son and daughter-in-law, the medical staff and others who come into contact with her, they are not able to resolve them. Nor are we.

Hagar’s story is told through integrated flashbacks. She was born in the small town of Manawaka in Canada, and her life was hard, but not distinguished by any exceptional misfortune. Her mother died in childbirth, she married against her father’s wishes a much less refined man and bore him two sons, before leaving him and finding her own way in life with her youngest son. In this novel children frequently disappoint their parents, do not inherit their looks or skills or abilities, are rejected, not favoured or die and are much mourned.

Hagar believes that people should be private, independent and above should avoid embarrassing displays of emotion. These views prevent her from asking for help when she needs it; grieving at her son’s death; or accepting that she is aging. And this is where the dilemma of aging lies. Hagar wants independence but she is not able to be independent. For example, she has never been able simply to rejoice.

Every good joy I might have held, in my man or in any child of mine or even the plain light of morning, of walking the earth, all were forced to a standstill by some brake of proper appearances – oh, proper to whom? When did I ever speak the heart’s truth?

Pride was my wilderness, and the demon that led me there was fear.

While the novel illustrates the strong gender divisions between men and women in Canada (as elsewhere) at this time, these are not the main causes of Hagar’s situation. We must also feel sorry for poor put-upon Doris, who as Hagar’s daughter-in-law has to change her bedding at night, manage an ungrateful and bitter woman, and is herself in her sixties.

While one sympathises with Hagar’s unwillingness to accept some of the patronising attitudes she meets within the healthcare system, we are also acutely aware that she is not acting in her own best interest. Here she is at a visit to the GP

Finally I’m called. Doris comes in as well, and speaks to Dr Corby as though she’d left me at home.

‘Her bowels haven’t improved one bit. She’s not had another gallbladder attack, but the other evening she threw up. She’s fallen a lot-‘

And so on and so on. Will she never stop? My meekness of a moment ago evaporates. She’s forfeited my sympathy now, meandering on like this. Why doesn’t she let me tell him? Whose symptoms are they, anyhow?

Margaret Laurence has created a very believable character in Hagar Shipley, but one that also chills us, because we see so much of ourselves in her (according to Sara Maitland afterword in the Virago Modern Classics version I read) and I agree with this.