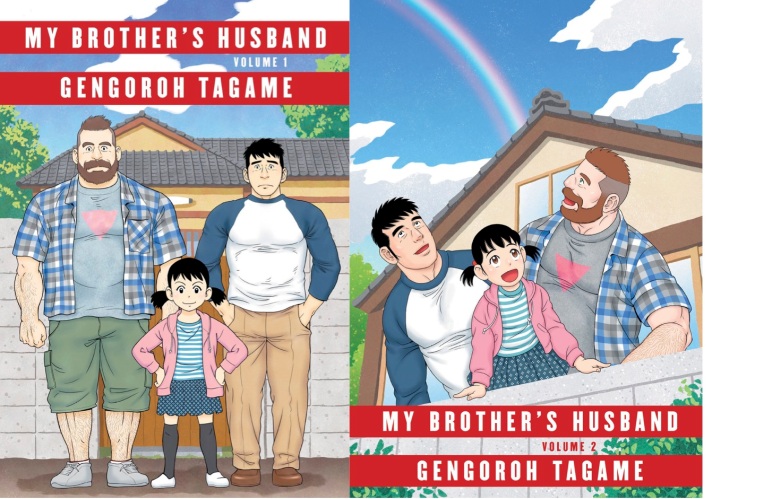 I was captivated by My Brother’s Husband, by Gengoroh Tagame, translated by Anne Ishii. The story’s warm, gentle trajectory addresses an important subject for teens and, frankly, readers worldwide: accepting one’s sexuality and, more specifically, being gay in a homophobic society.  Author Gengoroh Tagame is an award-winning, openly gay Japanese manga artist and thus well qualified to speak to this topic.

So what is this two-volume manga about and what makes it so special?

Says Tagame, “[My Brother’s Husband is] about a man whose little brother marries another man, has a same sex marriage with a foreigner who then comes to visit the family and what happens. It’s kind of a “Guess Who’s Coming to Dinner” kind of thing…The motivation behind writing My Brother’s Husband has been the same as the motivation behind all my writing, which is I write what I want to read. What I want to see in the world isn’t out there, so I create it…Around ten years ago I really wanted to write a gay themed story for straight readers. Fast forward to when I was talking to editors at Futabasha, my Japanese publisher. I presented to them the book proposal, they liked it, they approved of it, and voila!” (B&N Sci-Fi & Fantasy Blog)

The story begins when single parent Yaichi and his daughter Kana receive an unexpected visitor, Mike Flanagan, from Canada.  The antithesis of all things Japanese, Mike is hairy (which Kana discovers to her delight), huge, very foreign… and fascinated by Japanese culture. His love for the culture stems partly from his love for his recently deceased husband Ryoji, Yaichi’s twin brother.  As the story unfolds, we discover that Kana’s parents are divorced (rather than her mom being dead, as Mike initially assumes), that Mike has come to Japan because of a promise he’d made Ryoji , that Yaichi had, at best, mixed feelings when his brother came out, and that he had not stayed in close contact with his twin since Ryoji left Japan.  With Kana’s naïve questions and  emotional honesty leading the way, Yaichi examines his own fears about having a gay man staying in his home and being part of his family, how Japanese society views gay marriage and gays, in general, and how exclusion and marginalization affect those on both sides of the equation.  By the end of Mike’s stay, Yaichi, Kana, and  Yaichi’s ex-wife Natsuki all consider Mike a beloved member of their intriguingly different family.

Same sex marriage is not legal in Japan, although it is in Canada. That simple difference speaks volumes and creates dramatic tension within Ryoji’s birth family. Yet describing My Brother’s Husband as “merely” an advocacy tale with the agenda of fighting homophobia does not begin to do it justice. One of its strengths is how it shows readers an enticing glimpse into Japanese society and some of its mores.  Another is the book’s humanity; a third is the depth of its characters. I quickly became engaged with all of them, so much so that I was sad to leave them when I finished the second volume. I can only hope that Yaichi and Kana eventually decide to visit Mike in Canada!

Disclaimer: I do not translate, speak, or even read Japanese. So I cannot address how faithfully Ishii rendered the original. But I can say that this is an excellent book that does not read as if it came from another language—one way to define a good translation. And the fluid prose, realistic dialogue and choices Ishii made as translator—such as how much and how to retain the parts of Japanese culture that are integral to the story, ranging from the characters’ names to explaining terms occasionally along the way—make My Brother’s Husband a standout.

Published originally as a serialized manga from 2014-17 by Futabasha Publishing Ltd. in Monthly Action, Tagame’s story was also adapted into a live action TV drama by NHK. Since being released in English translation by Pantheon, My Brother’s Husband has racked up well-deserved accolades, from the  inaugural GLLI Translated YA Book Prize and a 2018 Eisner for the Best U.S. Edition of International Material—Asia (for volume 1), to a 2015 Japan Media Arts Excellence Prize, and the 2018 Japanese Cartoonists Association Award.

Both heartwarming and heartbreaking, My Brother’s Husband is a sensitive, engaging story that I highly recommend.

Award-winning opera singer Nanette McGuinness is the translator of over 40 books and graphic novels for children and adults from French and Italian into English, including the well-known Geronimo Stilton Graphic Novels. Two of her latest translations, Luisa: Now and Then (Humanoids, 2018; a 2019 ALA Barbara Gittings Literature Award Honor Book, PUBLISHERS WEEKLY’s 2018 Best Summer Reads and NPR’s 2018 Guide to Great Reads ) and California Dreamin’: Cass Elliot Before the Mamas & the Papas (First Second Books, 2017) have been chosen as YALSA’s Great Graphic Novels for Teens. Her most recent translation is Superman Isn’t Jewish (But I Am…Kinda) (Humanoids, 2018).