Poetry is very popular in Bulgaria; I am still very much surprised about the sheer amount of new poetry collections that are published on the small Bulgarian market every year by „regular” publishers, but also by authors themselves (self-published, or “Samizdat” as they say in Bulgaria – an expression that hints at the subversive tradition of “self-publishing” in the Eastern European countries). And if we add the countless number of frequently very young people who publish their poems in Facebook, on blogs, or who read their poems in public – poetry readings are also a phenomenon that has emerged mainly in the last years, and many of them are well-visited -, you can imagine that Bulgaria is a country where there is no shortage of poets – or of people who would like to be called “poet”, in this part of the world still a very prestigious epithet.

But poetry needs also readers, and English-speaking readers face a problem here: it is difficult to orient yourself, if you are not already familiar with Bulgarian literature/poetry. In a series of four blog posts, I will try to provide a little orientation regarding Bulgarian poetry in English translation. What is available in English, where can you start, and what are the most interesting poetry books by Bulgarian authors in English – I hope you will find some useful answers regarding these questions in my small series.

The first part is devoted to anthologies; they are frequently the best way to get an overview about a certain literary genre or literary period since they cover a number of authors. 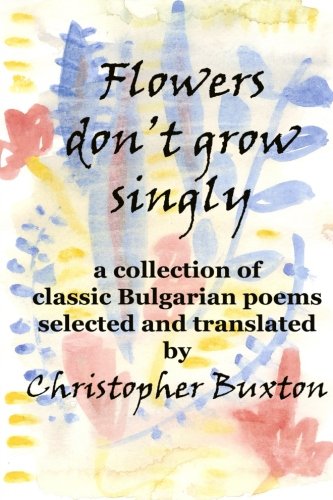 Flowers don’t grow singly (CreateSpace 2016) is the name of a collection of classic Bulgarian poems selected and translated by Christopher Buxton, an author and translator that lives in Bulgaria since a long time. The earliest poems in the book are folk songs collected by the Miladinov brothers, and starting from Hristo Botev, Pencho and Petko Slaveykov, all the major authors of the pre-1944 period are represented; names like Mara Belcheva, Peyo Javorov, Geo Milev, Hristo Smirnenski, Dora Gabe, Dimcho Debelyanov, Elisaveta Bagryana, Nikola Vaptsarov, and others. A comparatively small collection that gives a representative overview over this “classic” period of Bulgarian poetry. As a “teaser” you could have a look at the website of Christopher Buxton with some samples of his translations.

At the End of the World: Contemporary Poetry from Bulgaria (Shearsman 2012) is an anthology of seventeen Bulgarian poets writing and publishing from the middle of the twentieth century to today. Editor Tsvetanka Elenkova – herself an accomplished poet – and the translator Jonathan Dunne, her husband cover in this bilingual anthology the period that chronologically follows the covered period of the previous anthology; therefore a useful addition to your library, especially considering the excellent translations and interesting choice of authors: among them many of the most important names of the period covered by this book, such as Ivan Teofilov, Lubomir Levchev, Nikolay Kanchev, Ekaterina Yosifova, Ilko Dimitrov, Silvia Choleva, Peter Tchouchov, Kristin Dimitrova, Iana Boukova, Marin Bodakov, Yordan Eftimov, Nadya Radulova. Recommended for all with an interest in the post-1944 and contemporary Bulgarian poetry. A sample from the book can be found here.

The Season of Delicate Hunger (Accents Publishing 2013) is a 334-page collection of contemporary Bulgarian poetry, containing 197 translations of works by 32 Bulgarian authors, a titanic work by the editor Katerina Stoykova-Klemer, who translated almost all the poems in the collection herself. All authors of this anthology are alive, writing and actively participating in the Bulgarian poetry scene. They represent a diversity of talent, ranging in age from 72 to 21, with each at a unique stage of his or her career. The edition is bilingual and profits from the fact that Stoykova is a remarkable poet herself. Highly recommended! (You can find more information on the book here)

The literary scene in Bulgaria is quite diversified, and that’s particularly true for poetry. A new, fresh – and for some a bit provocative – poetic movement is New Social Poetry, a group of poets that has developed quite an impressive presence since its creation, with regular readings in various Bulgarian cities, a literary journal, and a number of books. New Social Poetry – The Anthology (CreateSpace 2018, translator Christopher Buxton) gives an overview about the variety of authors that are part of this movement or associated with it. (The anthology is also available in French – translator Krassimir Kavaldjiev -, and a Spanish and German translation are in preparation.) While some of the authors in this collection belong to the older and middle generation of Bulgarian poets, there is also a considerable number of young and very talented authors represented in this bilingual anthology, which makes this book a welcome enrichment to the previously published anthologies. 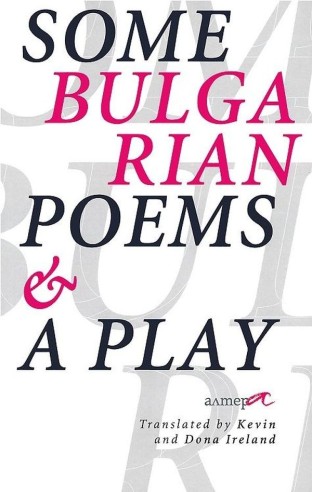 While I am editing this blog post, I found out that there is at least a fifth anthology that belongs here: Some Bulgarian Poems & A Play (edited by Zheny Bozhilova-Haytova, translated by Kevin and Dona Ireland; Altera 2014). This is an anthology containing samples of Bulgarian poetry from the late Revival period (1860’s) until the 1960’s. I haven’t seen it yet and it will be probably a bit difficult to order it outside Bulgaria, but this is a book I will look up in the near future.

End of Part I

Christopher Buxton graduated in English and American literature at the University of Kent. He first came to Bulgaria in 1977 as an English teacher in Burgas. He has had two novels published in Bulgaria, Far from the Danube and Prudence and the Red Baron and has also written a number of articles for Vagabond Magazine on contemporary Bulgarian social, cultural and political issues. Some of his translations of Bulgarian classic literary texts can be found on his website. They include stories by Yovkov and Elin Pelin, poetry by Kiril Christov, Ivan Vazov, Vladimir Bashev, and Christo Fotev. He is a committee member of the British Bulgarian Friendship Society. Together with his wife, he is running Black Sea Oleander Press, a small independent publishing house. 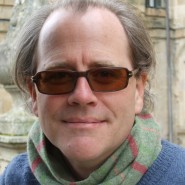 Jonathan Dunne was born in Kingston-upon-Thames, England, in 1968 and studied Classics at Oxford University. He is director of the publishing house Small Stations Press, which publishes quality literature in English and Bulgarian, including an anthology of Raymond Carver’s poetry and a Galician novel, The Carpenter’s Pencil, both in Bulgarian translation. He translates from Bulgarian, Catalan, Galician and Spanish into English. His translations of work by authors such as Iana Boukova, Tsvetanka Elenkova, Ivan Teofilov, Manuel Rivas and Enrique Vila-Matas have been published by Random House, Shearsman Books and Shoestring Press in the UK and Europa Editions, New Directions and Overlook Press in the US, and have appeared in the magazines Absinthe, Calque, Modern Poetry in Translation, Poetry Review, Poetry Wales and Zoland among others. They have been nominated for major literary prizes, including the 2003 International IMPAC Award, the 2008 Independent Foreign Fiction Prize and the 2009 Warwick Prize for Writing. He has written among others: a poetry collection, Even Though That (2004), and a study of English word connections, The DNA of the English Language (2007), and The Life of a Translator (2013).

Tsvetanka Elenkova was born in Sofia in 1968. She has published five poetry collections and two books of essays, Time and Relation and Bulgarian Frescoes: Feast of the Root.  Her poetry has been translated into thirteen languages. Two poetry collections have appeared in English, The Seventh Gesture and Crookedness. Her work has appeared in the magazines Absinthe, ILQ, MPT, Orient Express, Poem, Poetry Review, The Massachusetts Review and Zoland Poetry. She has edited the anthology At the End of the World: Contemporary Poetry from Bulgaria together with the magazines Ah Maria and Europe 2001 in Bulgaria and Helios in Greece. Crookedness has been nominated for the Ivan Nikolov National Prize for Poetry, her translation of Speaking of Siva for the Hristo G. Danov National Award. Other translations include poetry by  Raymond Carver, Rosalia de Castro,  Lois Pereiro, Manuel Rivas, and Fiona Sampson. She is editorial director of the publishing house Small Stations Press. 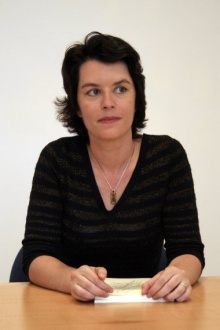 Katerina Stoykova grew up in Bourgas, Bulgaria. In 1995, she immigrated to the United States and for over a decade, worked as a software engineer in high-tech companies. In November, 2009, she graduated from the brief-residency MFA in Writing Program at Spalding University. Katerina writes poetry and prose in both Bulgarian and English. She enjoys translating between the two languages, as well. Her poems and stories have appeared in numerous literary publications in the United States and in Europe. Her first poetry book, the bilingual The Air around the Butterfly (Fakel Express, 2009), won the 2010 Pencho’s Oak award, given annually to recognize literary contribution to contemporary Bulgarian culture. She is the author of the chapbook The Most (Finishing Line Press, 2010) and Indivisible Number (Fakel Express, 2011, Bulgarian only). She is the editor of the anthology Bigger Than They Appear: Anthology of Very Short Poems, (Accents Publishing, 2011). Her poems have appeared in publications throughout the US and Europe, including The Louisville Review, Margie, Adirondack Review and others. Her poetry book The Porcupine of Mind was released in 2012 by Broadstone Books. Katerina is the founder of poetry and prose groups in Lexington, Kentucky that have been meeting since early 2007. She hosts Accents—a radio show for literature, art and culture on WRFL, 88.1 FM, Lexington. In January 2010, she launched Accents Publishing—an independent press for brilliant voices.

New Social Poetry is a Bulgarian literary movement, created in 2016 in Sofia.

A poet, fiction writer and librettist, Kevin Ireland (born 1933) grew up in Auckland. He lived in England for 25 years, though he has consistently identified himself as a New Zealand poet. He has published numerous collections of poetry and his first book of prose was released in 1995, followed by his first novel in 1996. He was awarded an OBE for services to literature, and received a Prime Minister’s Award for Literary Achievement in 2004. He translated Bulgarian poetry together with Donna Ireland (editor Zheny Bozhilova-Haytova).

7 thoughts on “Bulgarian Poetry in English Translation: Some Anthologies – an overview by Thomas Hübner”