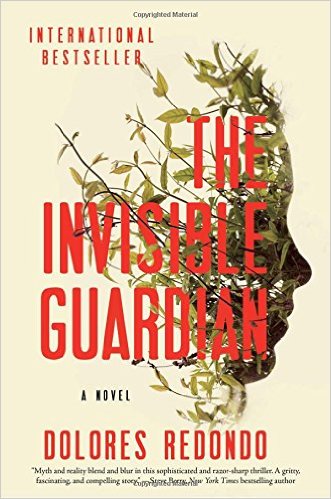 The Invisible Guardian by Dolores Redondo; translated from the Spanish by Isabelle Kaufeler; Atria Books 2016

Following in the strong tradition of the Spanish novela negra, The Invisible Guardian is the first of Dolores Redondo’s Baztán trilogy. This crime thriller blends traditional elements of the genre with mythologies and superstitions of Spain’s Basque Country. This novel, which is already an international bestseller, will also soon be adapted for the big screen with a movie planned for early 2017.

The Invisible Guardian follows Inspector Amaia Salazar as she returns to her hometown of Elizondo after the body of a teenage girl is found on the banks of the river. The novel starts out at a slow pace, but it doesn’t detract from the story. Instead, Redondo’s deliberate narration perfectly sets the scene of Elizondo in winter – dense woodlands, mist-shrouded rivers, and the threat of a mythical creature stalking the forest. As more bodies are found, Amaia works to discover whether these murders are the work of a serial killer or the Basajaun, a mythical Basque Country creature akin to the Sasquatch. At the same time, she is also confronted with tense family relationships and a dark secret from her past that she will be forced to confront.

As the investigation builds, the pacing of The Invisible Guardian picks up and the book itself becomes hard to put down. The tension between the mythical and scientific explanations for the crimes in particular makes for a gripping story. Redondo’s own experience of living in the Basque country is clear, and she uses this to truly immerse the reader in the setting. To top it all off, Amaia’s character development is thoughtful and well executed, although the descriptions of some of the secondary characters leave something to be desired.

Overall, The Invisible Guardian is a unique and carefully crafted crime thriller that definitely leaves the reader eager for the next in the series. In the English translation, Isabelle Kaufeler does an excellent job of conveying the mood and setting Redondo has created for her trilogy. English language readers should also be on the lookout for the recently translated second book in the series, The Legacy of the Bones.