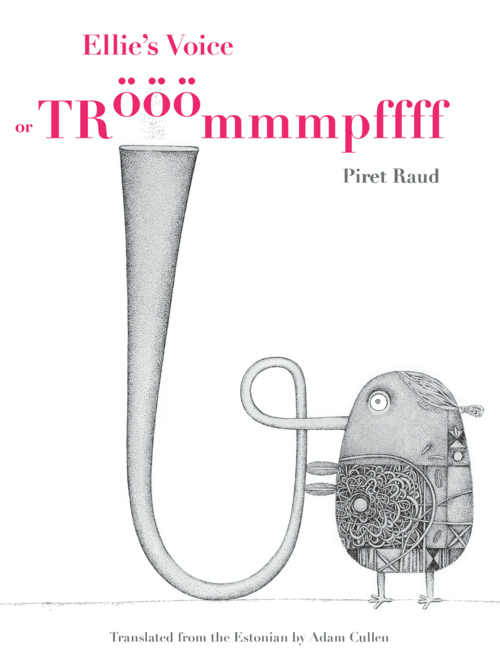 Ellie’s Voice or Trööömmmpffff,* an adorably whimsical Estonian picture book for ages 3-6, is about a seabird named Ellie, who has no voice.

“Everything else has a voice,” Ellie thought sadly. “The trees rustle.
The waves crash. Even the rain sings when it falls.”
I’m the only one who can’t make a sound.”
Ellie felt tears well up in her eyes—that’s how sad she was to be voiceless.

One day Ellie found a horn and blew it. The sound wasn’t necessarily beautiful, but at least she could make some kind of noise. She was ecstastic… until Albert the fish told her that the horn actually belonged to Duke Junior, who had lost it. Without it, he was “completely incomplete!”

Poor Ellie! Her new voice wasn’t rightfully hers at all. So she searched for Duke Junior. When she finally found him, he did, indeed, look “glum and incomplete.”

But when she gave Duke Junior his horn, the previously raucous sound Ellie had been making turned into melodious music so glorious that Ellie felt fine about giving up the horn and her recently found voice. In fact, Duke Junior played so expressively that she was content with herself just as she was, as his music “was more than enough for her.”

Ellie’s Voice… is a sweet parable about self-acceptance and selflessness, two important themes. But what makes this book so very special? Piret Raud’s marvelously intricate, witty black-and-white illustrations.  It will come as no surprise to readers that Raud studied printmaking, nor that she has illustrated roughly 50 books. Adam Cullen’s poetic translation doesn’t hurt the appeal of this wonderful story either.

Award-winning opera singer Nanette McGuinness is the translator of 60 books and graphic novels for children and adults from French, Italian, German, and Spanish into English, including the well-known Geronimo Stilton Graphic Novels. Two of her recent translations, Luisa: Now and Then and California Dreamin’: Cass Elliot Before the Mamas & the Papas were chosen for YALSA’s Great Graphic Novels for Teens; Luisa: Now and Then was also a 2019 Stonewall Honor Book. Her most recent translations are For Justice: The Serge and Beate Klarsfeld Story, The Sisters #7: Lucky Brat, Chloe & Cartoon, Brina the Cat #2: City Cat, LGBTQ manga, Alter Ego, and A House Without Windows, which she also assisted in editing.

One thought on “#WorldKidLit Weekend: Ellie’s Voice or Trööömmmpffff”