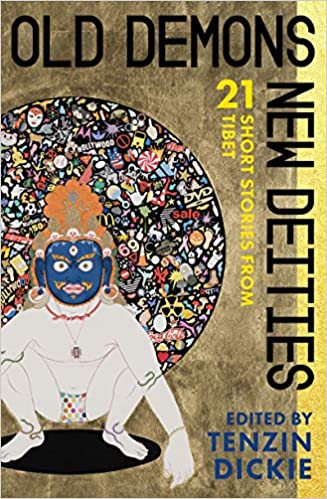 Yesterday, we read about the Rohingya of Myanmar, whose story has only recently become well known outside of the region. A far more familiar story of community exile is that of the Tibetans. 60 years after a failed uprising against Chinese rule, up to 100,000 Tibetan Buddhists live in exile in India, mostly in Dharamsala, or “Little Tibet”, the border city where the Central Tibetan Administration is based. While the Rohingya lack a single galvanizing figure, right from the start of their exile the Tibetans had both a political and spiritual leader in Tensin Gyatso, the Dalai Lama, who has authored and been the subject of hundreds of books and articles since fleeing Tibet in 1959. Yet few in the West would be able to name many Tibetan authored books aside from those by the Dalai Lama and his family circle.

That is a pity, since the Tibetan exile has produced several extraordinary writers, whose fiction and poetry describe the experience of everyday Tibetans, as opposed to that of their internationally famous leader. Contemporary Tibetan literature is as a whole far less sentimental and spiritual about life in Tibet than many Westerners might expect. Whether they are living in India, Nepal, or the West, Tibetans must reconcile their longing for a lost homeland with the reality of unreliable cellphones, dead end jobs, and unhelpful bureaucrats. The picture book, Brad Pitt inspired imagery of soaring mountain peaks and inscrutable monks does not represent the Tibet of today.

The Tibetan exile is unusual in that it exists both inside and outside its borders; both those who remain in Chinese controlled territory, and those who fled abroad feel cut off from their people and their homeland. For an excellent taste of the complexity and contradictions of Tibetan exile, there is no better place to start than Old Demons, New Deities, (2017) an anthology of short fiction by Tibetan writers. Edited by Tenzin Dickie, herself the child of Tibetan exiles and born in an Indian refugee camp, these 21 stories cover the breadth of the Tibetan diaspora experience. As Dickie notes in her introduction:

Modern Tibetan literature is just under forty years old: its birth dates to 1980, when the first Tibetan language journal was published in Lhasa. Since then, short stories have become one of the primary modern Tibetan art forms. Through these sometimes absurd, sometimes strange, and always moving stories, the English-reading audience gets an authentic look at the lives of ordinary, secular, modern Tibetans navigating the space between tradition and modernity, occupation and exile, the personal and the national. The setting may be the Himalayas, an Indian railway, or a New York City brothel, but the insights into an ancient culture and the lives and concerns of a modern people are real, and powerful.

Most of the authors in Dickie’s collection are second generation exiles. The tension between those who remember Tibet first hand and those who only experience it through their parents’ memories is at the heart of Coming Home to Tibet. In this beautifully written memoir a daughter raised in exile travels to Tibet seeking to explore the heritage of her mother’s people as they struggle to maintain cultural integrity under occupation . Coming Home to Tibet is Tsering Wangmo Dhompa’s evocative tribute to her mother and her rediscovered homeland.

Dhompa’s journey is a discovery of her roots, but also leads to a better understanding of her dead mother, and to the incomparable sense of loss she felt all her life:

My mother showed her gratitude for her life in exile by alluding to India’s modernity: the expansive railway network; the Bollywood movies she came to love for their tumultuous stories which ultimately conceded to the cardinal guidelines she held in her own life- love, family and duty. Still, it was Tibet’s antiquity that anchored her in exile. It was phayul she longed for when her skin was scorched by the summer heat of India’s plains. When she drank milk she compared it to the milk of her childhood for such sweetness and creaminess was not easily forgotten, and when she felt nauseous riding the buses that weaved their way around curvaceous mountain roads she spoke of the horses she had loved to ride…..I realized early that despite her gregarious and inherently buoyant disposition, a certain sadness resided in my mother. Even I, her only child, whom she loved more than anything in the world, could do little to soothe the sorrow that has taken root with the separation from her parents, her two sisters and her brother. The contrast in the life my mother experienced before and after leaving Tibet was so extreme, it must have been impossible for her to make sense of her life and to escape the inexhaustible longing for the past. Caring for me on her own inside crowded rooms of tenement buildings in towns and cities, she must have felt she had dreamt her past or that she was dreaming her present existence. The places and residences we lived in were never quite home to her and led her to cling, more tenaciously, to the past. My mother had guarded her past sorrows from me because she knew me well enough to sense I would carry her grief as my own.”

A radically different approach to Tibetan identity is on view in the work of Thubten Samphel. Born in Tibet in 1956 Samphel escaped to India as a child, where he served as an administrator in the Central Tibet Administration for decades. His one novel, Falling Through the Roof (2008) looks back to Tibet’s past, interweaving ancient Tibetan history with the story of radical young Tibetan students living in exile in India after the Chinese takeover in 1959.

This is a historically grounded novel, with magical realist elements. Tashi and his friends study hard and drink hard in their Tibetan community just outside Delhi, where they meet a high-ranking monk who enchants the students with tall tales about their collective homeland. Through his dreams, the monk becomes convinced that Tashi is a reincarnation of a legendary Tibetan lama, believed to have discovered the Tibetan written language.

Samphel could easily have drowned in cheesy mysticism, yet his novel has an earthy humor to it; with their quarrels, soap operatic love affairs, and naive political posturing Tashi and friends resemble Victor Hugo’s “Friends of the ABC” in Les Miserables. (another literary work composed in exile).

Samphel offers great insights into both the traditional world of Tibet and the hybrid world of exile. While his characters chafe at their rootless statelessness, they remain optimistic, always able to laugh at the absurdity of their situation. As Tsering Namgyal Khortsa, another Tibetan novelist puts it:

If there is only one underlying message here, it is that, while the Tibetan diaspora may have lost its physical home, they have gained a much larger spiritual space in return. These days, their culture thrives, albeit in various hybridised forms. It is for this reason that this magnificent novel from India — at once elegiac and exuberant — is in itself proof of the Tibetan resilience.

For more on the lives of the Tibetan diaspora, see

After nearly six decades of exile, some Tibetans in India are slowly letting go of the past

60 years after exile, Tibetans face a fight for survival in a post-Dalai Lama world

3 thoughts on “Literature of Exile: Tibet”