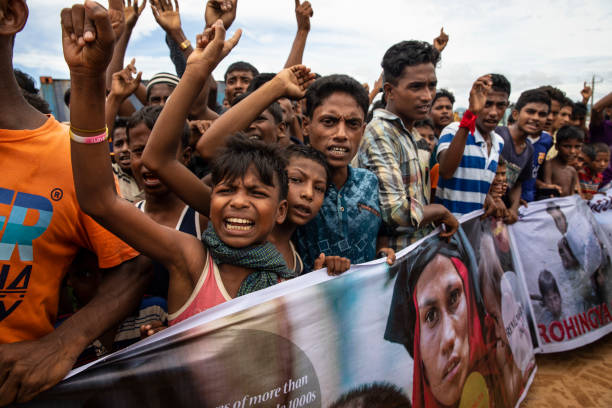 Hello again! Many of the authors we will read about this month were exiled in isolation, for their individual acts of dissent or rebellion. Yet there are stories of entire communities exiled and driven from their homelands. One such expulsion that has captured world attention in recent years is that of the Rohingya. Although they have lived in Myanmar for hundreds of years, in 1982 the country’s military leader Ne Win redefined Myanmar’s national identity by declaring that  the Rohingya were not one of the 135 recognized ethnic groups that formed the eight ‘national races’. This decree left over a million Rohingya stateless in their country of birth. Following a campaign of extreme violence by the Myanmar authorities against Rohingya people in Myanmar’s Rakhine province, over 800,000 emigrated to  Bangladesh. Today, about 860,000 stateless Rohingya refugees live in the world’s largest and most densely populated refugee camp, Kutupalong. Thousands of Rohingya refugees wait to be given asylum in Saudi Arabia, the United Arab Emirates, India, Thailand, Australia and the United States.

There is not currently a very robust written  Rohingyan literature. The Rohingya language is distinct from the official languages of Myanmar, and was not taught in schools there. According to the Rohingya Post:

The earliest Rohingya writing dated back over 350 years and it used Arabic script. However, our writing was lost during the British colonial period from 1826 until 1946 and therefore English, Urdu and Farsi languages were mainly used for written communications. Then Hanifi script, which is a blend of Arabic, Burmese and Roman scripts, was developed after the independence of Burma.

Many Rohingyan refugees were denied an education in Myanmar and were thus illiterate, yet we are beginning to see examples of Rohingyan memoirs and poetry. One of the first is the haunting, First They Erase Our Name, by Habib Habiburahman, a Rohingyan refugee who escaped first to Southeast Asia, and now lives in Australia.

First They Erased Our Name was first published in French by translator Sophie Ansel, although Habibirahman originally dictated it to her in English, making this a rare case of a book composed in one language, translated into a second and then translated back into the original.

Habib says he wanted to write his story because “my generation, my grandfather, great-grandfather – we have been oppressed for a long time and this has never been reported. Our history is [becoming] lost. The land where we lived in the past is now replaced with government buildings, new projects; everything has gone. The new generation of Burmese, they don’t know anything about Rohingya.” Although he recounts the terrors of his experiences as an exile, he also conveys the lost beauty of his family life in Myanmar before they were forced to flee. In this tender scene he recalls his Grandmother caring for him when he was sick, while recounting the family legacy:

Her words continue uninterrupted, barely distinguishable from the ambient noise. I don’t know whether she is talking to me, Mum or Dad or to the tormented figures from another time and place who live on in the depths of her memory. Fleeing, endlessly roaring, shrieking, and screaming for help. The ghosts of our people who perished, decapitated by swords or burnt to death. This is where my fear of fire started: back then the flames were always populated by Grandma’s wailing ghosts.

‘A long time ago Habibi, the world was vast and infinite. Men and women travelled slowly, keeping time with nature and God as they searched for peaceful and fertile lands. Entire people boarded huge ships and crossed oceans. Sailors invoked the clemency of nature by offering up a small gem each day that was swallowed by the waves and deposited on the ocean bed. This is how our ancestors arrived safe and sound in the Kingdom of Rohang, which we now call Arakan. It is this land of plenty blessed by God which gave rise to the Rohingya, a peaceful tribe of fishermen and farmers.

She squashes her nose into my cheek, inhales deeply then places a clean cloth on my forehead, which is beaded with sweat.

‘Your memory is all you will have to keep our history alive Habibi. So listen to me carefully because your grandmother won’t be here forever.’

Habibirahman goes on to recount his hopes for the next day, of “the next football march with the village boys. Marble games. Cartwheels and coconut juice”. Yet the threat of violence is never far removed; in the midst of schoolboy games, Habiburahman is targeted for abuse, and his normally warm and affectionate father punishes rather than sympathizing, reminding the child : “You are Rohingya, Habib. You must not play with just anyone, anywhere, and anyhow. You must know your place…Play is a luxury we cannot allow ourselves.”

It is this juxtaposition between the quotidian warmth and beauty of village family life and the ever-present terror of ethnic cleansing which renders Habibirahman’s story so gripping. After his family was expelled from their village, (destroyed to make way for military toilets) Habibirahman became involved in a student politcal group and was arrested and tortured. He escaped to Thailand, then Malaysia, then eventually to Australia, although he was forced to leave his family behind. His father, mother and siblings are now scattered between refugee camps in 3 different countries; loss of home and family was the price he paid for freedom.

Habibirahman dedicated his book to his family, his people, and to the larger family of exiles and refugees:

the oceans, jungle, and highways of the world,

To you, the reader may you tell our story,

which has been stifled by propaganda, racism, fascism,

May the truth one day be known and a light shone on our tragedy, the hidden history of Burma.

To my family, to my father and my mother

To tolerance and peace

To life and love.

For more information by and about the Rohingya, see The Rohingya Post, which publishes their essays and articles.

For a profile of Habiburahman see ‘The land where we lived has gone’ – the life story of a Rohingya refugee, in The Guardian, August 4th 2019

One thought on “Literature of Exile: The Rohingya #ExileLit”