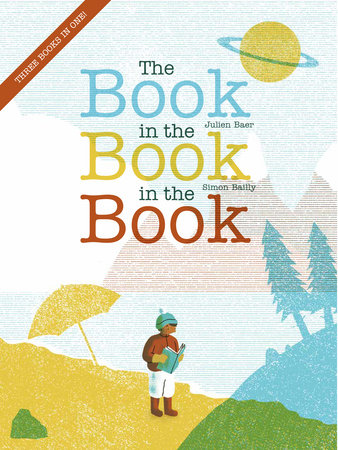 Have you ever lost yourself in a book?

That’s the conceit behind this whimsically clever novelty book for ages 4-8 written by Julien Baer, illustrated by Simon Bailly, and translated by Elizabeth Law. A mini-Matryoshka doll in picture book format, the story follows Thomas, who wanders off at the beach when his parents take a post-lunch nap in the warm sun. (Warning to parents: never nap at the seashore!)

It’s a quiet, gentle book, so he doesn’t go very far. And instead of getting scared when he feels lost, he just gets cold. On the ground he spots “a little book, all worn, left behind and forgotten”—poetic words guaranteed to entice any dedicated reader worth their salt, no matter their age.

What would you do?

Curious, Thomas picks it up. He is immediately drawn into this new, little book, which echoes his beach experience and repeats the previous text… except this time, the illustrations show him in the mountains. When he gets lost again and opens yet another, smaller book, we can see that his imagination has now put him in a spacesuit and moved him to outer space. But since nothing bad can become of getting lost in a good book, he suddenly hears his parents’ voices nearby—which yank him back to the present. No longer lost or cold, he rejoins them and they happily go home together, leaving the book on the beach to entice its next curious child reader.

Each book Thomas finds is shown as an actual mini-book pasted inside the original one. While personally I would have liked a third, tiny book, and the banner on the front cover ruins the surprise by advertising “three books in one”—a spoiler if there ever was one—I was charmed by the notion behind this unconventional book and enjoyed its execution.

I think you will, too.


Award-winning opera singer Nanette McGuinness is the translator of over 50 books and graphic novels for children and adults from French, Italian, and German into English, including the well-known Geronimo Stilton Graphic Novels. Two of her latest translations, Luisa: Now and Then (Humanoids, 2018) and California Dreamin’: Cass Elliot Before the Mamas & the Papas (First Second, 2017) were chosen for YALSA’s Great Graphic Novels for Teens. Her most recent translations are Little Josephine: Memory in Pieces (Life Drawn, 2020) and Super Sisters (Papercutz, 2020).