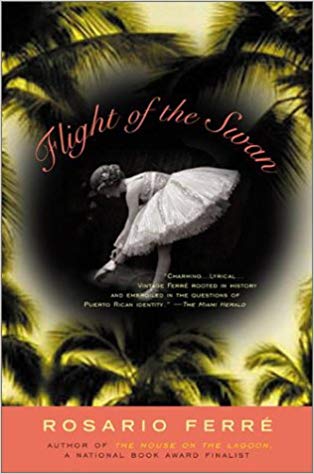 This month we will be taking in and discussing some of the literature of the island of Puerto Rico, whose beautiful prose is matched by the strength of its people’s character.

Rarely have I come across a novel so masterfully layered as Rosario Ferré’s Flight of the Swan. Like the movements of its ballet prima donna Madame, its prose switches between moments of high passion and muted reflection with razor-sharp alacrity, each movement building towards a crescendo of tempestuous proportions.

The novel centers around a group of Russian ballerinas stranded on the island of Puerto Rico in 1917, just as the first World War has reached its zenith. Russia has just abandoned the war with country in the throes of bloody revolution, and the ballerinas of Madame’s company find themselves without a country as the war between Czarists and the Bolsheviks takes hold in the motherland. Masha, our point of view character for the majority of the novel, is a Minsk peasant who escaped cruelty and dances (albeit relatively clumsily) in Madame’s world-renowned ballet company, while also serving as the prima donna’s confidante and closest friend.

It is through the filter of her eyes that a world of contradictions is painted—one where Madame’s sacred figure blushes furiously with lust and love, where the sons of nobles espouse Bolshevik ideals, where an island is simultaneously American, Spanish, and its own separate place. Ferré’s prose finds its energy and passion in the delicate balance of these tensions, a tightrope act on a personal and societal level. Madame and Masha’s invocation of the transcendence of ballet’s art is incandescent, their words passionate in a way that brings to mind the best writings of The Beat Generation, whose wild celebration of life seems at times both vulgar and holy. Just as the ballerinas dance the Bacchanale, that wild celebration of excess and hedonism, they believe they perform the sacred rite of bringing transcendent art to the common folk. Ferré’s novel is at its best when ruminating on these powerful contradictions.

I had not read any of Ferré’s work prior to reading Flight of the Swan, and I am disappointed in myself for not having read it sooner. She depicts a world in turmoil, which desperately presents the facade of well-being in order to survive. Character’s motivations and actions resemble greater societal movements but do not parallel them. Like the time itself, the characters are messy, self-interested, and sometimes brutal to themselves and others. Yet, every one of the characters from Madame and Masha to the young Diamantino and clever Dandre are also swans in flight—beautiful and ephemeral. It is difficult to do justice to the effortless manner in which Ferré switches Masha’s voice from the lyrical to the lowly. Yet, the author has managed this and more, skillfully bringing together the disparate ties of political discontent, tension between social classes, sacrifice for artistic ideals, and the pursuit of love.

There was so much beauty in this book that my heart ached to close its pages. It left me raw, heartbroken, and content. Of its many beautiful contradictions, this last one was perhaps the most bittersweet.