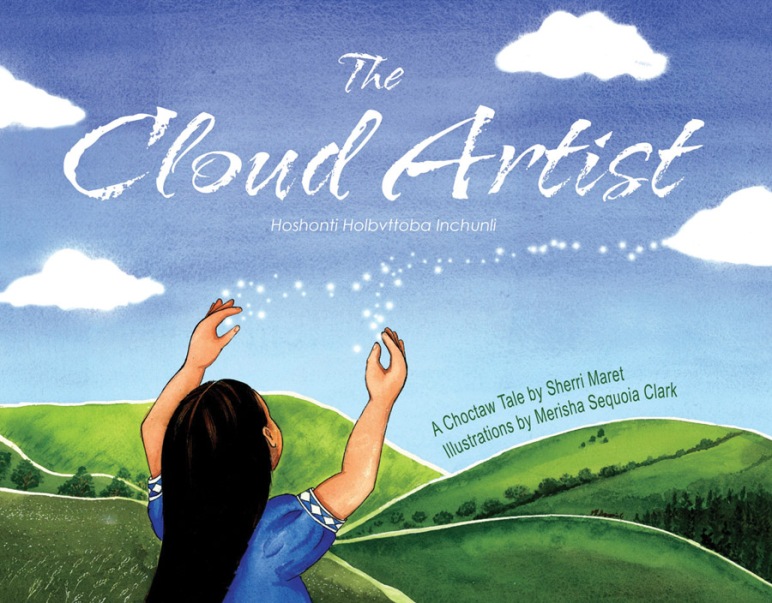 When you know that every day some 86,000 people go online to study the Choctaw language, it makes it a little easier to understand why one of the best things about Sherri Maret’s new picture book The Cloud Artist may be that it can be read in both English and Choctaw.

In doing so, it does its small part to preserve the Choctaw language, as it raises the veil on Choctaw culture in a way that will engage young readers and have them looking to the sky.

Both Maret and illustrator Merisha Sequoia Clark are Oklahoma Choctaws, with the Choctaw translation done by Dora Wickson of the Choctaw Nation’s language department in southern Oklahoma, where the tribe has resided since its removal from Mississippi in the 1830s (long before Oklahoma became a state in 1907).

A modern-day Choctaw tale, The Cloud Artist recalls old tribal folk stories or ancient European fables. It recounts the story of a little Choctaw girl named Leona who discovers, while still quite young, that she can paint with the clouds.

It is a surprisingly original idea for a children’s story—the idea of a painter using the sky as a canvas and the clouds as paint, yet given how children enjoy spotting shapes in the clouds, an idea one would have thought would have found itself into a picture book many, many times before now.

But such seems not to be the case.

The author resisted the urge to turn Leona’s gift into a novelty act or gimmick, instead the story celebrates her unusual art, while also exploring what can happen when such a gift is exploited and what heights can be reached when such a gift is cherished and nurtured.

In the end, The Cloud Artist becomes that rare generational story as the reader sees Leona grow from an infant into a child, then young maiden, and finally a tribal elder. Her art matures as well over the course of her life—beginning with simple bunnies and flowers and ending with iconic Choctaw scenes of women and children walking the Choctaw Trail of Tears or athletes playing sprawling games of stickball.

There are little telling Choctaw details as well. In the simple log room where Leona is born, a family portrait hangs on the wall—one straight from the family scrapbook of the book’s illustrator.

There is also a handmade baby quilt that instead of being discarded as Leona grows bigger grows with her turning into the quilt for her wedding night.

Those unfamiliar with Choctaw culture may not recognize the emphasis on family and community or the reverence reserved for nature and place as Choctaw values, but they will benefit from them being there just the same.

And one can’t help but think that seeing the cloud art Leona creates—mighty herds of buffalo, a string of prancing mustangs—will inspire young readers to lift their eyes from their digital devices to the sky where they can find cloud art of their own.