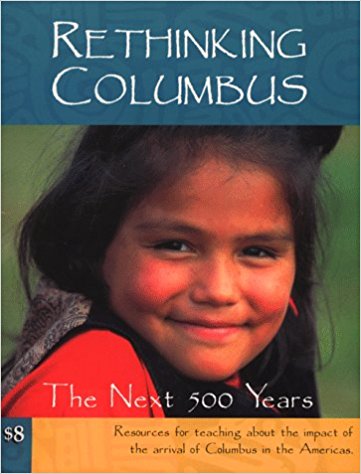 It’s a shame to think that a text like Rethinking Columbus: The Next 500 Years would be banned anywhere—but it was, by the Tucson school district. Thankfully, the book has remained popular elsewhere. Rethinking Columbus is a collection of primary sources, lesson plans, poems, essays, stereotype checklists, and interviews not only intended to help young minds think critically about what they’ve learned about America’s founding fathers, but think critically about their own biases and perceptions about numerous non-white citizens and their histories. “Black Indians and Resistance” is one of several standout essays that comes to mind. The book presents a lot to take in, and this collection accomplishes so much so well. The discussions of prejudice are not dumbed down, nor are they shaming, but simply pointing out why history has been misconstrued and what can be done about it. For example, one of the interviews suggests the issue of how increasing awareness for Native Americans might be seen as just emphasizing one culture over another, but this is ultimately an empty argument. The first step of action, of course, is being well informed.

Editor Bill Bigelow has contributed several vital articles in this text: “Discovering Columbus: Re-reading the Past,” “Good Intentions Are Not Enough: Recent Children’s Books on the Columbus-Taino Encounter,” and “Columbus’s Diary: Reading between the Lines,” to name a few. Many of these are excellent teaching tools and potential teaching tools. For example, having students stealing desks and purses helps them understand what happened to Native Americans.

There is plenty of material adults could learn from or return to as well. For example, who is Leonard Peltier? One amusing part in this book is when a woman is walking out of a showing of Dances with Wolves, and some white people near her are saying how unfair Native Americans were being treated and how they would have been outside the norm and done something about it if they had lived back then. The woman says to them, “Where were you guys at Oka?” referring to the resistance in Canada in 1990.

Rethinking Columbus was published in 1998, but Ward Churchill’s contribution, “Radioactive Mining,” puts into perspective the realities of several reservations that are very much relevant to the economical and environmental concerns on reservations today.

There’s an index of books for adults, primary sources, and curricular guides at the back of the book. As comprehensive and as important as this text is, it only gives us a taste of the problem of poor representation of Native peoples.