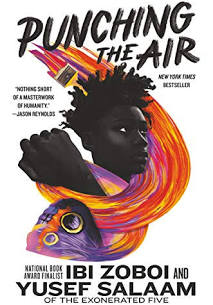 Punching The Air by Ibi Zoboi and Yusef Salaam, of the Exonerated Five is a book that illustrates how creative expression can be a powerful tool for activism and social change especially for our youth today.  Dr. Yusef Salaam is one of five African American and Latino men that were coerced into falsely confessing and wrongly convicted of raping  a white woman in New York City’s Central Park in 1989.  The young men, Antron McCray, Kevin Richardson, Raymond Santana, Korey Wise along with Yusef Salaam,  were only in their early teens at the time and without legal representation led them to serving between six and thirteen years in prison. In 2002, the young men were exonerated due to the actual rapist being found and convicted.  Hence the term “Exonerated Five ” given and based on a Netflix docu series, “When They See Us,” directed by Ava DuVernay, an award winning African American filmmaker in 2019.

This book illustrates how teen voices are expressive and cannot be silenced which has been shown in many protests across the world.  I am not only a librarian, a librarian of color, but a librarian that is an advocate for our youth.  I promote creativity and self expression as a way for self care, for awareness, and for activism.  It is also important to mention that when using the word “art,” that it is inclusive to all art that is self expressive. I think this is a great book for youth to help guide them through life with eyes opened and to teach them what perseverance and resilience looks like. This book includes hip hop, art, teaching tools, and shows what it is to be a young Black man in the United States of America.

Who Is Amal Shahid?

He is a self-expressive 16-year-old that feels his love for art and poetry will create an escape from the hypocrisy in this world. It serves as a rite of passage for him.   He lives in a neighborhood that is now going through gentrification and he attends a diverse art school where teachers feel his art is not like that of classic white artists.  He is seen as not-motivated. He’s also seen as not “teachable” (a word that is strongly attached to youth of color when it comes to the education system).  He questions the traditionalism of art in class versus his own.  Why is his art not truly what it is meant to be?   His art soon will be sacrificed and at risk of being silenced when he is convicted of a crime that he did not commit.  Simply stated, the injustices in society are not equal and fair to those that are not white.  So his fight begins and his spirit is tested.  Will his expressive identity help him survive this injustice? Will it save him?

This book is a great book for ages of 12-18.  It is written in hip hop format which in itself is a draw, especially for young men.  It speaks about how in education and the criminal justice, systemic racism is highly prevalent in the United States, and that young men of color are not spared at any age.  It also illustrates how there is even a difference when it comes to art and what is taught in the classrooms.  “Traditional” creativity versus “self” creativity which both still has a history and tell a story which is what young people need to see.  It is okay to think differently from those that accept traditionalism as the norm.  It is strongly accepted and encouraged that art is an expression of voice.  It teaches humility to the reader to not be blind about what happens in society, but to live with your eyes open so that change can happen.

Ibi Zoboi is a Haitian-American born author who enjoys writing for young adults.  Ibi was born  in Port-au-Prince, Haiti and immigrated to the U.S. when she was four years old.  She is notably known for the book, American Street which is her first novel.  She has a husband and three children.

Dr. Yusef Salaam is an African American born in Harlem, New York.  Yusef is known as a member of the Exonerated Five which includes a group of African American and LatinX men that were falsely accused of a crime they did not commit.  Yusef is an activist for social justice, motivational speaker, trainer, coach and author.

Monica Porter, a Public Services Librarian at the University of Michigan, University Library.  I was born in Detroit, Michigan and now reside in Ypsilanti, Michigan with my husband.  I  assist with developing programs with our campus partners, local youth community advocates and schools for young people, especially young people of Color to make sure they have the resources needed for success.

#BlackIsBeautiful is curated by Shantee Burns-Simpson.

Shauntee Burns-Simpson (MLIS) currently serves as the 2020-2022 President of BCALA. She is the Associate Director of School Outreach for The New York Public Library. An ambassador for libraries and Youth Librarian, President Burns-Simpson enjoys connecting people to the public library and its resources. She works closely with at-risk teens and fosters a love of reading & learning with her innovative programs. In addition to leading BCALA, she chairs the American Library Association Office of Diversity, Literacy, & Outreach Services (ODLOS) Committee on Diversity.