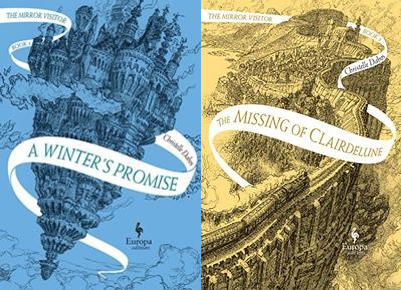 Set in a post-Rupture steampunk world, A Winter’s Promise and The Missing of Clairdelune by Christelle Dabos tell the story of Ophelia, a member of the Anima ark who can animate objects. Unassuming, clumsy, and shy, Ophelia has two major talents and life passions. First, she is a superb object “reader,” i.e., she can view the past of an object and the entire history of how anyone has interacted with it merely by touching it. The other? She can travel from one place to another via mirrors.

When the story begins, Ophelia is the happy curator of her ark’s history museum. She has already turned down two offers of marriage, which is causing problems in this Victorian-style society. Her world is turned upside down when the Doyennes, the de facto rulers of her ark, announce that she is to be married off to a member of a different ark, one at the distant, frigid Pole (another of the many shards remaining after the earth broke apart). And she has no choice in the matter. Thus is the stuff of a Victorian heroine’s nightmare created.

Pity the poor Ophelia when she discovers that her betrothed, the aptly named Mr. Thorn of dubious birth, appears coarse, brutish and uncouth in manner when he arrives to whisk her off to the Pole. While she’s no beauty/Jane Eyre and he’s no beast/Mr. Rochester, nor is this that tale, over time the reader watches their puzzling relationship grow, learning more about him, the talents of those who live at the Pole, and the immortal family spirits that actually rule over each ark.

It’s a delightfully intricate piece of world-building and an even more deliciously intricate plot, filled with danger, intrigue, death, odd characters, and politics. The two books unfold slowly, with the second ratcheting up the tension and raising the stakes as the series develops into a classic multilevel whodunit of heritage and identity and as Ophelia’s two talents become increasingly crucial in unraveling what really happened.

A Winter’s Promise and its sequel, The Missing of Clairdelune (a title that reads awkwardly in English but eventually makes sense), are the first two books in the Mirror Visitor Quartet. If you like your terse Hemingway, this wildly popular, multiply-awarded crossover YA fantasy series may not be right for you. But if the phrase “wheels within wheels” intrigues you and anything by Philip Pullman pulls at you, you’ll find that the wonderful Mirror Visitor Quartet suits you to a “T.”

Currently only three of the four volumes have been published in English, for those who prefer to swallow their series in one big gulp. As for me, I’m torn: I can’t decide whether to wait for Hildegarde Serle’s translation of the fourth book to be published—she does a fabulous job in these first two and the third is now out—or to run and read it in the original French right away.

A Winter’s Promise and The Missing of Clairdelune

Translated from the French by Hildegarde Serle

Interview with the author

Award-winning opera singer Nanette McGuinness is the translator of 60 books and graphic novels for children and adults from French, Italian, and German into English, including the much-loved Geronimo Stilton Graphic Novels (Papercutz, 2007-17). Two of her latest translations, Luisa: Now and Then (Humanoids, 2018) and California Dreamin’: Cass Elliot Before the Mamas & the Papas (First Second, 2017) were chosen for YALSA’s Great Graphic Novels for Teens; Luisa: Now and Then was also a 2019 Stonewall Honor Book and a 2020 GLLI Translated YA Book Prize Honor Book. Her most recent translations include Little Josephine: Memory in Pieces (Humanoids, 2020), Undead Messiah #3 and Bibi & Miyu, (both TOKYOPOP, 2020) Brina Cat #2: City Cat and The Sisters, Vol. 6: Hurricane Maureen (both Papercutz, 2020).

One thought on “#WorldKidLit Wednesday: A Winter’s Promise/ The Missing of Clairdelune”