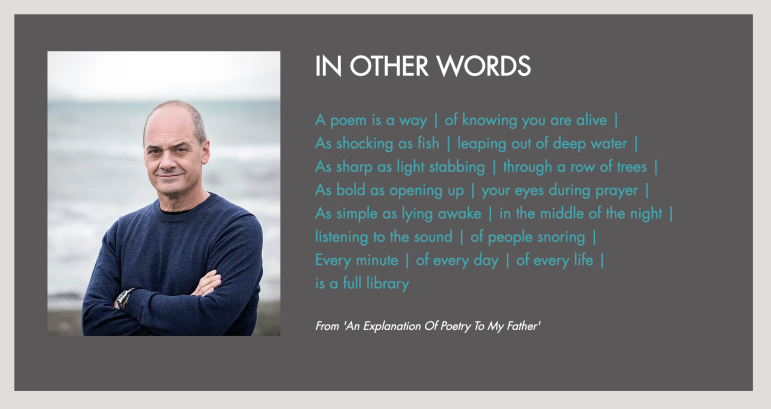 I have this poem on the noticeboard above my desk at work. I work in a school library and that last line is magic to me. Here is the complete work– thanks for Victory University.

Glenn Colquhoun is someone who lives life to the full. He is a practising Doctor, working for a youth health service in Horowhenua, New Zealand. He draws on every aspect of his life experiences, medical, Seventh Day Adventist, Scottish European and Maori ethnicity for inspiration when writing. There is a depth to his poetry and writing that matches his character.

An example of this is the fence around his home. He writes about it in a blog post on his website ‘The poem as a fence”. The fence around his property was rotting and needed to be replaced. He had been exploring the life stories of fourteen New Zealand conscientious objectors during World War One. Some of these men were forced to go to war and were hung on posts at the front. Colquhoun had also been reading that a group wanting to create a memorial for these men had been struggling to find any land or any support. So, his fence needed fourteen posts, and each of those posts has the name of each of the fourteen men. There is more to the fence, of course, it is a visual representation of some of the things that Colquhoun holds dear.

His first book of poetry “The art of walking upright” was published in 1999 and relates to the time he spent in the Northland community of Te Tii in the Bay of Islands. He grew up in South Auckland and studied to become a minister in the Seventh Day Adventist Church. He changed his mind about this calling and after a few other jobs he trained to be a doctor. In 1994 he took one year to be part of the community at Te Tii and returned there for a time to practice general medicine.

From the moment he was published Colquhoun has been winning awards. The Art of Walking Upright won the Jessie Mackay NZSA Best First Book of Poetry Award at the 2000 Montana New Zealand Book Awards. He received the country’s largest literary award, the Prize in Modern Letters, worth $60,000, in 2004. He is recognised internationally with his work on the Scottish Poetry Library website and receiving a Fullbright Scholarship to Harvard University in 2010 to explore medical storytelling programmes. In 2018 he went to Longfellow House in Cambridge, Massachusetts to read his poems. While there he reflected, “Most of my career I seem to have written my poems to a set theme, whether it’s the practice of medicine, or that coastline between Pākehā and Māori, or an exploration of oral poetic forms. So it was really nice to sit on Henry’s lawn and just write something that bubbled up from the moment. It made me want to do more of this, i.e. sit still and notice what is right in front of me.” Here is the poem he wrote while there, it is called “At Longfellow House”.

In Dale Husband’s interview entitled “Glenn Colquhoun: A sort of white Polynesian” published in 2016, Colquhoun expresses these thoughts, “…there are two poetries in our country. There’s the one we’re taught about in school. That’s English poetry — and there are many Māori who’ve written that form of poetry. Not just Hone, but others like Jackie Strum and Rory Habib and Roma Potaki and Robert Sullivan.

But there’s this other whole poetic tradition that’s embodied in haka, mōteatea, whakataukī, whaikōrero and karanga. It’s beautiful. These forms are full of metaphor and allusions to myths and history and landscape. They’re oral maps and oral histories — and they’re sung.” As Colquhoun goes into his future writing he wants to explore written poetry and the oral traditions together. You can listen to him read some of his poetry on his website and at this link on the Lyrikline website.

This generous poet give a sneak preview of this future work – in the most recent post on his website he shares a poem written for one his patients, “Heart murmurs” (for Zoe) which finishes with the line “Your heart is a song”. A poet with heart – Glenn Colquhoun.