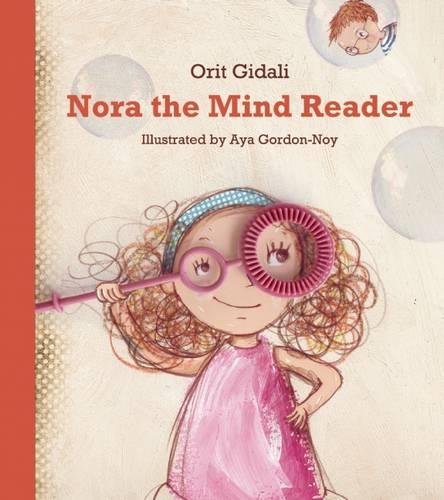 When a boy calls young Nora “flamingo legs,” a magic bubble wand tells her that he secretly likes her. When a girl says, “I’m telling everyone not to play with you,” the wand reveals that the girl feels blue when she can’t have Nora all to herself.

Could it be that lots of what people say—especially teasing and insults—belies what they think, and masks more fear and love than they let show?

Nora the Mind Reader by Orit Gidali, illustrated by Aya Gordon-Noy and translated from Hebrew by Annette Appel, explores this topic in a clever way. When Nora comes home glum after the “flamingo legs” incident, her mother produces a bubble wand that reveals people’s true thoughts. Nora soon sees that what is spoken, is often not what is thought:

A person who says, “You ask too many questions,” turns out to be thinking, “You’re so smart.”

Another who says “you bug me” really means “hug me”!

A photographed bubble wand overlay combines with drawing and collage that, in a short space, show many ways in which speech and thoughts can differ—and unite. Near the end, where Nora’s father says and thinks, “Hi! Give me a kiss. Let’s have lunch,” it’s a reminder that speech can convey truth and love, just as we need it to, when we’ve had a bit of practice.

Perhaps my favorite part of Nora the Mind Reader is the printed Hebrew that infuses the collage art, in the same way printed English appears in the Pinkalicous picture books by Victoria Kahn. The Hebrew type is visually interesting—makes great fabric for the father’s pants!—and it subtly normalizes a multilingual environment. That makes me say and think YES!

A surefire pick for the Pinkalicious set.

Avery Fischer Udagawa’s translations from Japanese to English include J-Boys: Kazuo’s World, Tokyo, 1965 by Shogo Oketani, “House of Trust” by Sachiko Kashiwaba in Tomo: Friendship Through Fiction—An Anthology of Japan Teen Stories, and “Festival Time” by Mogami Ippei in The Best Asian Short Stories 2018. She is the International and Japan Translator Coordinator for SCBWI.

One thought on “#WorldKidLit Wednesday: Nora the Mind Reader”