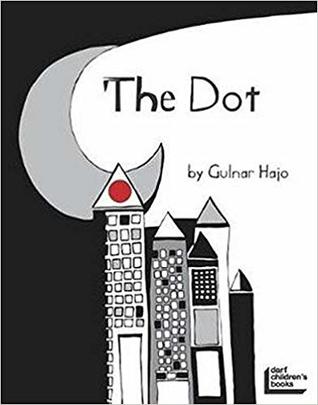 The Dot by Gulnar Hajo was originally published in Arabic by Bright Fingers Publishing House in Syria. The English translation by literary translator Ruth Ahmedzai Kemp is available through Darf Children’s Books, an independent children’s publisher based in the UK.

The Dot opens, appropriately enough, with a dot, a mere speck in the big broad universe. This dot has sat in the same place for years, although we’re not told why, and one day, for reasons unknown, it starts to move. The dot meets other dots on its journey and together they start to make shapes. And then the shapes join forces as the creative fun continues!

Each short piece of text is accompanied by vibrant illustrations principally in black and white with bright red, yellow and orange accents. As the dots form a square, the double spread becomes a riot of squares of differing shapes and sizes, suspended like decorations from the outer edge of the page, and stacked like boxes, one inside the other, and one on top of the other. A similar illustrative approach is used for the subsequent shapes: rectangle, triangle and circle.

Then comes the shift from simple geometric shapes to more complex objects, as the shapes join creative forces. What do you get when you combine a triangle and a square? A house . . . of course! And what a fabulous house it is – big, bold and smiling like a giant emoji, and dwarfing the tower blocks that flank it. But let’s zoom in on those high rises, because they very neatly combine triangles, squares and rectangles. In fact, readers will have huge fun spotting all the shapes that make up the objects on this page and those that follow.

It’s a wondrous world of beauty and diversity that Gulnar Hajo conjures up for us in words and pictures. And let’s remember, it all started with a dot, a mere speck in the big broad universe. The Dot is a celebration of creativity and collaboration, inviting readers to take a fresh look at the shapes that make up our world. I think it would make a great read-aloud, particularly in a preschool setting.

The Dot by Gulnar Hajo, translated from the Arabic by Ruth Ahmedzai Kemp (Darf Children’s Books, 2019)

Gulnar Hajo has published more than 20 books for children. She is also the co-founder with partner Samer Kadri of Bright Fingers Publishing House and Pages Bookshop – two Arabic-language café bookshops that cater to Arabic-speaking refugees and immigrants in Amsterdam and Istanbul. Born in Damascus, Syria, she is now based in Istanbul.

Ruth Ahmedzai Kemp is a British literary translator. She has translated a number of children’s/YA books from German, Russian and Arabic into English. She is a passionate advocate for international children’s fiction and is co-editor of the World Kid Lit Month blog and Twitter account.

This is an edited version of a post originally published on Planet Picture Book in July 2019.

Laura Taylor is the founder of world children’s literature blog Planet Picture Book. She is a small business copywriter, NAATI-certified translator of French into English and member of AUSIT. When she is not writing, she is reading and chasing after her two young children.  She tweets regularly @plapibo and posts at www.planetpicturebook.com