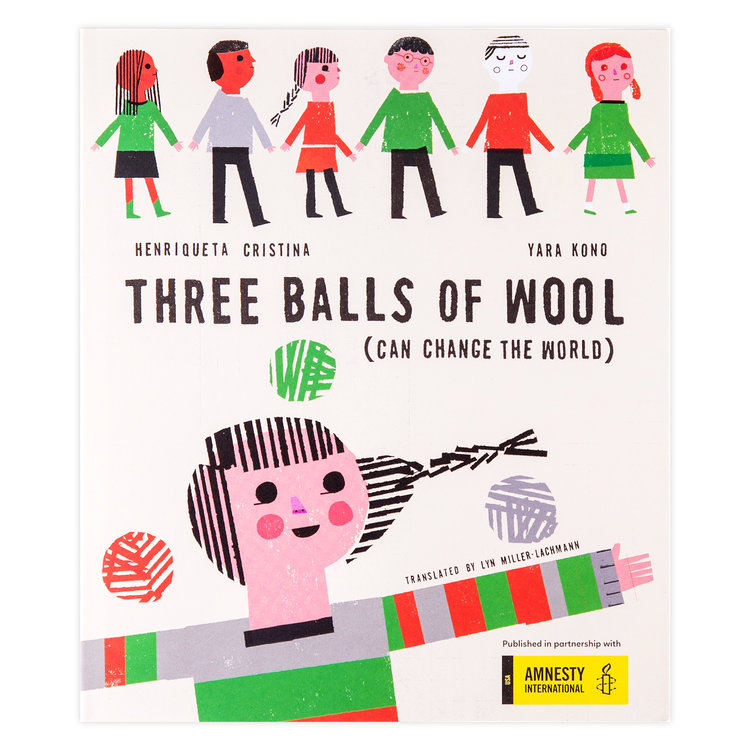 Ready to reboot a makerspace? I have a yarn about yarn to inspire you.

Three Balls of Wool (Can Change the World) by Henriqueta Cristina, illustrated by Yara Kono and translated from Portuguese by Lyn Miller-Lachmann, uses knitting to show how a bit of creativity can make life better, even in rough circumstances.

A family forced to leave home arrives in a new place that seems better at first, but then proves to have too much sameness. The school is like a gray shoebox, and the students all wear sweaters in just three solid colors: orange, green, and gray. “They look like an army marching in their uniforms,” the mother whispers, on a spread that compares the children to stitches in an unvarying pattern.

One night, the mother snips a thread and unravels a gray sweater “like a movie played backward,” reclaiming the yarn and winding a skein. She does the same with orange and green sweaters, and she proceeds to knit new, multicolored sweaters that have stripes, zigzags, and diamonds—and seed stitch, slipped stitches, and cables. Her innovative knits soon draw attention, and before long other people in the neighborhood, including men and children, unravel their own sweaters to try similar projects. The result is a more varied and (not coincidentally) more beautiful community, which sports more smiles.

This story unfolds without particulars of place and time, but an afterword tells the story of a real family that fled Portugal’s right-wing dictatorship in the late 1960s, only to face exile in Algeria, Romania, and finally Czechoslovakia, where Communism meant shortages and enforced conformity. In the country they had fled, the family’s children could not go to school; in the countries of their exile, the children received education but not freedom.

Ultimately, the family managed to return home during the Marcellist Spring, and they saw the Carnation Revolution of 1974 end the Portuguese dictatorship. The Velvet Revolution of 1989 ended one-party rule in Czechoslovakia.

Maps in the book show Europe during the Cold War and now—in green, orange, and gray of course!—adding detail for readers keen to learn the history, and the book ends with full text of the Universal Declaration of Human Rights. There are many ways this title can feed discussions of education, migration, and forms of government.

But the hook (though the book is light on crochet) is the therapeutic act of undoing a “finished” garment and reusing its material to create something awesome. Something that makes kids bop and swagger and the adults’ frown lines soften. That’s the relatable strand in this yarn.

It’s perfect for this time of year. The last line: “Spring is here!”

2 thoughts on “#WorldKidLit Wednesday: Three Balls of Wool (Can Change the World)”