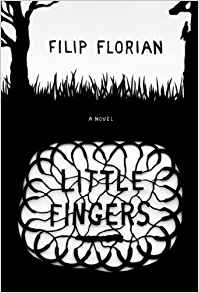 Filip Florian’s debut novel Little Fingers is a winding tale centered around the discovery of a mass grave in Romania, and the scramble of political agendas, deaths, and amusing vignettes surrounding it. It won the Best Debut Novel from the Romanian Writers’ Union after its publication in 2005.

Alistair Ian Blyth’s extremely faithful translation from the original Romanian portrays the series of events with an aloof wryness that seems almost to be torn from Terry Pratchett’s scrapbook—one particularly endearing passage illustrating the woeful life of an illegally imported camel who, after being neutered, is stimulated by the alcohol fed to it by tourists and blindly rampages about with no outlet for its bottle-necked urges. The humor of these situations is sometimes missed at first glance due to the meandering nature of the prose and its tight perspective—as I admittedly was guilty of in my first reading.

At first I was put off by the long, seemingly directionless sentences that populated the pages of the novel, however, as I began to delve deeper into the book I was struck by the various descriptions and tidbits nestled within parentheses, those juicy bits tucked away in the literary corners. I found fascination within the dysfunctional antics of the cast (ranging from the conniving plans of the police chief to the amusing asides of the townsfolk) which seems to be to be major meat of the novel. What drives the narrative is the gradual painting of perspective and character, the subtle shifting of perspective that simultaneously frustrates expectation and enthralls.

I went into the novel expecting something dour and serious given the starting place as of a mass grave discovery, and indeed found signs of this within, but also encountered an unexpected amount of humor and sarcasm, as well as a free-flowing narrative that brings to mind the film works of Jacques Tati and Itami Juzo’s Tampopo, albeit with a greater sense of despondency and loss in Florian’s painting of post-communist Romania. The characters are ultra-detailed, made up of those hundreds of things that fly through the mind when encountering someone for the first time, and conversations are fuzzy and distracted, like the batty relative who’s cornered you at a family reunion. Yet all of these things form a fascinating whole, an experiential, initially frustrating, but ultimately intriguing work.

Little Fingers is not an easy book to read. It delights in obfuscation and seemingly unrelated asides that combine together to form a whole. Yet for those with the patience to explore its labyrinthine passages, there is much treasure to be discovered.