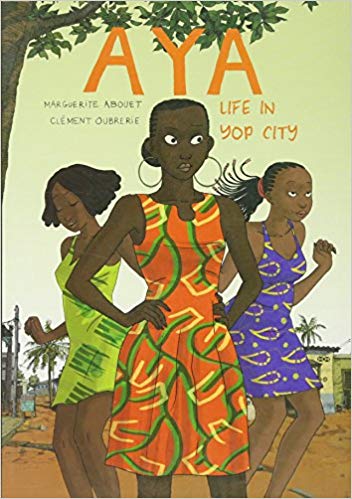 As an English major, I have been able to get a glimpse at how African literature is perceived in American society. We regularly consume images of Africans that depict low access to education, poverty, war, and disease as the continent’s major characteristics. For me, this highly publicized, dehumanizing narrative of Africa reinforces the importance of more access to African literature across the diaspora.  Why do the images of Africa most publicized in America portray the often dehumanizing narrative of poverty, war, and disease?

I am a firm believer that literature should reflect the human experience whether it be glorious or inflammatory. However, the practice of only publishing one narrative perpetuates unrepresentative stereotypes that dismiss the overall diversity of Africa. Marguerite Abouet’s Aya series (2005-2010) sheds light on this diversity and offers a different narrative while still including real adversities.

“That’s what I wanted to show in Aya: an Africa without the… war and famine, an Africa that endures despite everything because, as we say back home, life goes on.” -Marguerite Abouet

Marguerite Abouet was born in 1971 in Abidjan, Ivory Coast, in Western Africa. She grew up during a time of great prosperity in the Ivory Coast. After moving to Paris at the age of twelve and pursuing her education, she later became a novelist. Her love for telling stories about her youth years in the Ivory Coast of the 1970’s, lead her to the creation of the graphic novel Aya, which is illustrated by Clemént Oubrerie. These novels tell often comedic stories of her friends and family.

After reading many reviews of Abouet’s Aya series, I noticed a sadly unsurprising trend, which lead me to my second question: Why are Western views always imposed on African literature by critics and reviewers?

After scrolling through Goodreads , a reviewer of the Aya series  comment really stood out to me because I found her view to be common among many of the critical reviews; the review stated:

“I read the introduction uncomfortably. Abidjan in the period when Aya’s story is set is painted as a bright exception among African cities, and the reason given for its blossoming seems to be French influence. There’s even a remark along the lines of “women were Western-influenced and emancipated.” There’s another section in the book about finding “the universal” in the novel’s context, which is also uncomfortable. Supposedly Aya, by being about the everyday lives of young middle class women who are worried about family infidelity and finding love, but not about where their next meal is going to come from or whether the state they live in will collapse, works against stereotypes about Africa, but if the setting is presented as an exception, thanks to “Western” influence, then that only reinforces some of the most pernicious stereotypes “Westerners” have about exploited countries and people: that “Western” influence is good for exploited countries, that “universal” means “Western” or “just like us [Westerners]”, that a story must be “universal” to be relevant and interesting…” (“Zanna,” Goodreads)

Unexamined esteem for all things western is a problem, as this well-intentioned reader points out.  However, this reviewer opposes the “pernicious stereotypes” about Africa and yet can’t seem to escape them–she wants to remove Western influence from the discussion, when in actuality what appears “Western” in Aya is not so much Western as Cote d’Ivoirean, a postcolonial history which has its own reinterpretation and restructuring of what is called “West.” In the same way that the English language is no longer the sole possession of England, the West has long since lost possession of what is still called “Western.” Critically analyzing Aya without making note of the “Western influence” during the 70’s on the Ivory Coast would be inaccurate, due to the historical context of colonization. The author’s experience of Western influence is a legitimate experience, not just an oversimplified perpetuation of a stereotype. However, having these expectations of Africa being completely detached from the West—or anti-Western, and readers using their Western standards of what Africa should be or look like, is, ironically, what perpetuates stereotypes.

Instead of focusing on how the setting reinforces the idea “ that “Western” influence is good for exploited countries, that “universal” means “Western” or “just like us [Westerners],” that a story must be “universal” to be relevant and interesting”, readers might question how the reading reflects the society in which the author is providing. Therefore, while noting “Western influence” throughout Aya, readers should question how colonialism impacted the Ivory Coast and just not the author’s intent for including it. So, my final question: How should readers outside the diaspora read African literature without imposing a binary of “West” versus “African”?

I try to read every story for what it is (not just how I think it should be). Every experience reflected in a reading is a reflection of the society in which the author has experienced. That way, we can learn to understand how history has shaped perceptions—both our’s and the author’s.

One thought on “How We Read: Western Projections into the African Literature Space – by Yeshira Roseborough”