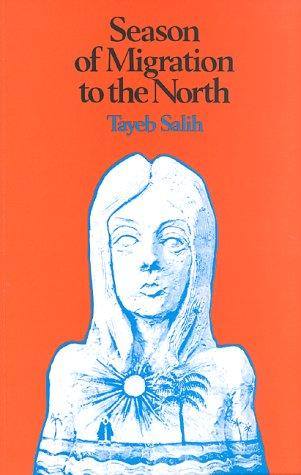 SEASON OF MIGRATION TO THE NORTH was selected by the Arab Literary Academy as the most important Arab novel of the 20th century, and is frequently cited as one of the most important post-colonial works in any language. Eminently readable, the metaphorical exploration of the relationship between colonial powers and their victims and the politics of desire between black men and white women invites comparison with Joseph Conrad’s HEART OF DARKNESS and the work of Frantz Fanon.

Its Sudanese author, Tayeb Salih, was a novelist, journalist and broadcaster. He was fluent in both English and Arabic, and wrote SEASON OF MIGRATION TO THE NORTH in Arabic. It appeared in English in 1969 in a translation by Denys Johnson-Davies, who was described by Edward Said as ‘the leading Arabic-English translator of our time’. Over the course of his 70-year career, the indomitable Johnson-Davies championed many great contemporary Arab authors, introducing them to anglophone publishers and readers. You can read more about his life and work in his memoir, MEMORIES IN TRANSLATION.

The unnamed narrator of SEASON OF MIGRATION TO THE NORTH returns to his home village in Sudan after seven years studying in England. He is intrigued by a new villager, the mysterious Mustafa Sa’eed, who speaks good English. Sa’eed relates the story of his murky past, including his calamitous, often fatal relationships with women. The book was banned in Sudan for several years from 1989 because of its graphic sexual imagery.

Another great gift to the English-speaking world in 1969 was the first of the Asterix comics, ASTERIX THE GAUL, translated from the French by Anthea Bell and Derek Hockridge. The phenomenal international success of René Goscinny and Albert Uderzo’s ASTERIX series is thanks in no small part to the ingenuity of its translators. The books are available in more than 100 languages and dialects, including Sinhalese, Esperanto and Swabian. Many have been translated into Latin and Ancient Greek with accompanying guides for language teachers.

Bell and Hockridge are widely acclaimed for their skill in rendering the puns and wordplay of the original French into English, often finding solutions that are even funnier than the original, as with the renaming of the characters. The little dog Idéfix (idée fixe) transforms satisfyingly into Dogmatix, while the druid Panoramix is unforgettably reincarnated (at the height of hippy culture) as Getafix. Meanwhile, in Italian (tr. Marcello Marchesi, Luciana Marconcini, Alba Avesini et al.), Obelix’s famous mantra ‘These Romans are crazy’ becomes ‘Sono pazzi questi romani’, which is presumably why Roman legionaries bear the standard ‘SPQR.’