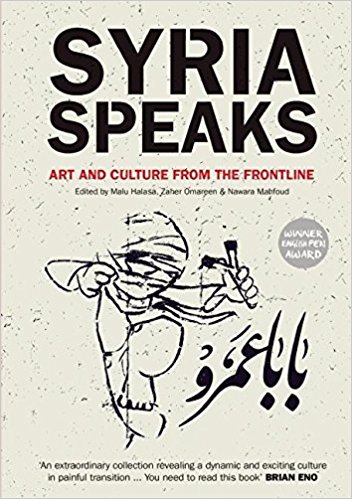 Syria Speaks is a collection of “art and culture from the frontline” of the Syrian revolution published simultaneously in English and Arabic at a time when the revolution had been underway for three years and been transformed into an armed conflict in which millions of Syrians had been displaced both internally and externally, and in which approximately 100,000 people had died, a number that has at least tripled at the time of this writing. In the midst of such violence and despair, the editors asked themselves “about the value of art and culture.” Their answer, this critical anthology that documents visual, literary and intellectual expressions engaging contemporaneously with the war in Syria.

The introduction provides a snapshot of the material and explains the motivation of many of the contributors who, “believe art is a tool of resistance, and that it is integral to social justice – emblematic of a life that is shared, not destroyed – and that it will protect Syria from the forces of Assad and the extremists in the future” (viii). Much of the visual material had been displayed previously in various exhibitions throughout Europe and England featuring Syria’s ‘art of resistance’, and the volume also includes essays, memoirs and poetry that developed as part of those shows or were created independently. In their totality, the contributions work on a number of levels: As testimony to a vibrant and complex artistic language employed by a wide range of Syrian writers, artists and intellectuals (in the broad sense of those terms) in both the service of and reflection on the Syrian revolution; as documentation of the diversity of interventions and of events on the ground; of the productive power of creative expression to engage both maker and viewer in the corporate nature of revolutionary action.

Reading and viewing the contributions, the reader will not only get a sense of all that is mentioned above through rich, innovative and emotional work, but perhaps more significantly, a sense of the conditions of life that existed before 2011 in Syria such would compel unarmed people into the streets to demand the “fall of the regime” in unison with Tunisian, Libyans, Egyptian and Yemenis. The subtly to which each contribution helps unfold the Syrian narrative is a welcome reprieve from the mainly top-down political science analyses that dominate our “understanding of the war”. Instead, the volume privileges responses that complicate this understanding. Art as an expression of desires becomes the medium to contemplate the histories and presentism of the Syrian experience. The contributors use their art and words as political tools to mediate the unspeakable violence that has engulfed their worlds. The editors conclude their introduction writing, “If there is a single message in Syria Speaks, it is that meeting violence with violence is never successful.” The success of this collection is in the contemporaneity and timelessness for which these artistic works bear witness against the violence perpetrated against civilians. 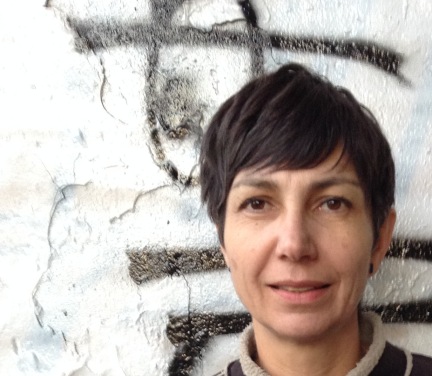 Alexa Firat is assistant professor of Arabic at Temple University where she teaches courses on Arabic Literature and cinema, and also language. She publishes scholary research on Syrian Literature and cultural productions in particular, and Levent in general. Firat is also a literary translator.

One thought on “Syria Speaks: Art and Culture from the Frontline”