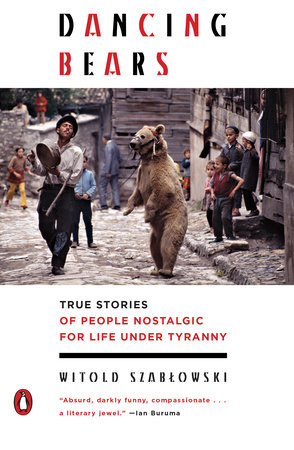 These extracts are from Chapter 8, Georgia: Stalin’s Vestal Virgins. The Georgian women who work at the Stalin museum describe their undying love for the infamous dictator.

“He comes to me at night. He gazes at me, puffs on his pipe, and twirls his mustache. He smiles, and then heads for the door. Then I weep and cry for him to stay. But what guy would be bothered by a woman crying? Georgian men are like that: they have a drink, enter you, come quickly, and fall asleep. I hate men who drink. But here in Gori there’s no other kind. The other kind only exists in American movies.

“Stalin was a different matter. Highly civilized. He knew how to take care of a woman, how to pay her a compliment, how to smell nice. He lived modestly, but he wore smart clothes. And he didn’t drink too much. And if he did, it was only good, foreign alcohol. I hardly need mention the fact that he conquered fascism and Hitler. So I said to myself many years ago, ‘Tanya, why the hell should you have to squabble with drunks? Why the hell, when you can live with Stalin?’ ”

“When I see what they’ve done to our beloved Stalin, my heart bleeds! How could they? How could they make such a good man into a monster, a cannibal, an ogre?

“Once upon a time, bus after bus came to our museum. People stood in lines several hundred yards long. I used to look at those people’s faces, and I could see the goodness emanating from them. But nowadays? One would bite the other. That’s capitalism for you.

“Now I don’t go there anymore. First, because of regret—for  my youth, my job, and my friends. And second, because my legs are weak. I can’t even get down the stairs on my own. In March I’ll be eighty-two, and you can’t expect a person to be healthy all their life. In the morning I get up, cut a slice of bread, make the tea, sit down, and say to myself, ‘O Christ, why did you let me live to see times like these? Why do they badmouth our darling

“But later I think, ‘Just remember, Tanya, how much Stalin suffered for the people. It was for you too that he went without enough food and sleep. He fought against fascism so you could finish your education.’ And then I fetch the medal with Stalin’s face on it, which I was given when I retired. I stroke the darling man’s mustache, and somehow I feel better.

“I worked at the museum from 1975. As a nabliudatel, a person responsible for the order and safety of the exhibits. If anyone tried to touch them, we had to go and shout at them.

“It wasn’t easy. Old women used to come from the villages and throw themselves at our Stalin. They had to kiss each picture in the display, like icons in a church. And there are over a thousand of those pictures! If a whole busload of those old crones drove in, and they all wanted to kiss them, what was I to do? If the director was looking, I’d go up and shout. But if he wasn’t, I’d say, ‘Kiss away, ladies. May God grant you good health! But don’t touch the mask! Under no circumstances.’ The mask is the most sacred object in the entire museum, because it’s his death mask.

“Before, I worked at the National Museum in Tbilisi, but my second husband was from Gori, and I managed to arrange a transfer. It wasn’t easy. The Stalin museum wasn’t a place you could just walk into off the street and ask, ‘You don’t have a job opening, do you?’ Public opinion counted. I was a divorcée. My first husband drank and beat me— the less said about him the better. At the time, I was afraid the divorce would be a problem. Luckily, I had a very good reference from the museum in Tbilisi.

“The smartest people from all over the world used to come and admire Stalin’s house. From all over Russia, Asia, and America. Journalists, ambassadors, and artists. And I stood among the exhibits with a small card showing my name, as proud as could be. That job meant everything to me. The museum was like a home to me.

“My husband didn’t understand. I had nothing to talk to him about. Although I only guarded the exhibits, I used to read books and got to know new people. But he drank too. He tried to beat me, but this time I wasn’t having it. Later on, he fell sick and went on welfare. He’d spend all day long sitting in the apartment, or at his mother’s. He used to say nasty things about Stalin, just to spite me.

“When the USSR collapsed, he stuck out his tongue at me. It gave him great satisfaction. And then he died.

“It’s a shame he didn’t live to the present times. Now I’d be sticking out my tongue at him. What do we need all this capitalism for, all these American cheeses, juices, and chocolate? You can’t even buy normal milk anymore—it has to be in a carton, because that’s how it is in America. I think, ‘O Christ, take me off to my dear Stalin. Take me away from this world, because I can’t bear it here any longer.’ ”

From Dancing Bears: True Stories of People Nostalgic for Life Under Tyranny by Witold Szabłowski; translated by Antonia Lloyd-Jones, to be published on March 6, 2018 by Penguin Books, an imprint of Penguin Publishing Group, a division of Penguin Random House, LLC. Copyright © 2014 by Witold Szabłowski and Agora SA. Translation copyright © 2018 by Antonia Lloyd-Jones.

Author
Witold Szabłowski is an award-winning Polish journalist. At age twenty-five he became the youngest reporter at the Polish daily newspaper Gazeta Wyborcza’s weekly supplement, Duży Format, where he covered international stories in countries including Cuba, South Africa, and Iceland. His features on the problem of illegal immigrants flocking to the EU won the European Parliament Journalism Prize; his reportage on the 1943 massacre of Poles in Ukraine won the Polish Press Agency’s Ryszard Kapuściński Award; and his book about Turkey, The Assassin from Apricot City, won the Beata Pawlak Award and an English PEN award, and was nominated for the Nike Award, Poland’s most prestigious literary prize. Szabłowski lives in Warsaw.

Translator
Antonia Lloyd-Jones translates from Polish, and has twice won the Found in Translation Award. She has translated works by several of Poland’s leading contemporary novelists and reportage authors, as well as crime fiction, poetry, and children’s books. She is a mentor for the Emerging Translators’ Mentorship Programme, and cochair of the UK Translators Association.