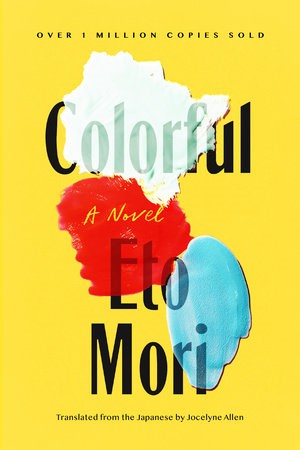 As my dead soul leisurely drifted off to some dark place, this angel I’d never seen before suddenly appeared right in my way.

So begins Colorful, a surprisingly humorous YA novel about mental illness, bullying, and teen suicide. The protagonist—nameless throughout most of the book—isn’t thrilled to win the celestial lottery:

I wasn’t quite happy with this sudden news. If I’d had eyes, I would’ve opened them wide in surprise, and if I’d had a mouth, I would’ve dropped my jaw and gaped. But I was nothing more than a formless soul…

It turns out that the protagonist has committed a mysterious error during his life. And the lottery he’s just won is a chance for a do-over in a body that the boss, “the father of all creation,” has chosen. In this case, it’s Makoto Kobayashi, a 14-year-old who has just killed himself.  The protagonist awakens in Makoto’s body without any of his own memories, and Makoto’s family witnesses an apparent miracle as he comes back to life in the hospital.

The newly re-embodied soul has a challenge during his one year do-over: he must improve on how he’d lived in his first life and figure out what his error had been. If he succeeds, he’ll regain his memories and get to be reborn. If not, his soul will be lost to oblivion, never to be reborn again.

Ever snarky, the angel, Prapura, stands at the ready to guide the newly reborn soul as he begins to inhabit Makoto’s life. “In angel industry slang, this training was referred to as a ‘homestay’.” Over time, the protagonist begins to understand Makoto and his family, and to live life more fully, in living color.

Teen suicide is a tragic epidemic today that snuffs out young lives long before they have a chance to unfold. Prapura’s tongue-in-cheek character and the strong, wry voice in Colorful help ease what could be a heavy read, for Mori deftly tackles her difficult topic with thoughtful skill and sensitivity.

Part mystery and part first-person narrative, Colorful offers a light-hearted approach that addresses its topic beautifully, as well as a satisfying, moving denoument. To say anything more would spoil the surprise ending of this wonderfully inspirational book.

You can buy a copy here.

Watch an interview with Mori translated by Allen.

Read about two adaptations of Colorful (anime and live action) and watch a trailer for the latter (entitled Homestay).

Award-winning opera singer Nanette McGuinness is the translator of 80 books and graphic novels for children and adults from French, Italian, German and Spanish into English, including the well-known Geronimo Stilton Graphic Novels. Two of her translations, Luisa: Now and Then and California Dreamin’: Cass Elliot Before the Mamas & the Papas were chosen for YALSA’s Great Graphic Novels for Teens; Luisa: Now and Then was also a 2019 Stonewall Honor Book. Her recent translations include Makhno: Ukrainian Freedom Fighter (the publisher is donating part of the proceeds to the Ukrainian war relief effort); Rosa Parks; Magical History Tour: Gandhi; Magical History Tour: The Plague, Bibi & Miyu#2, LGBTQ YA manga Alter Ego, and the critically acclaimed A House Without Windows.