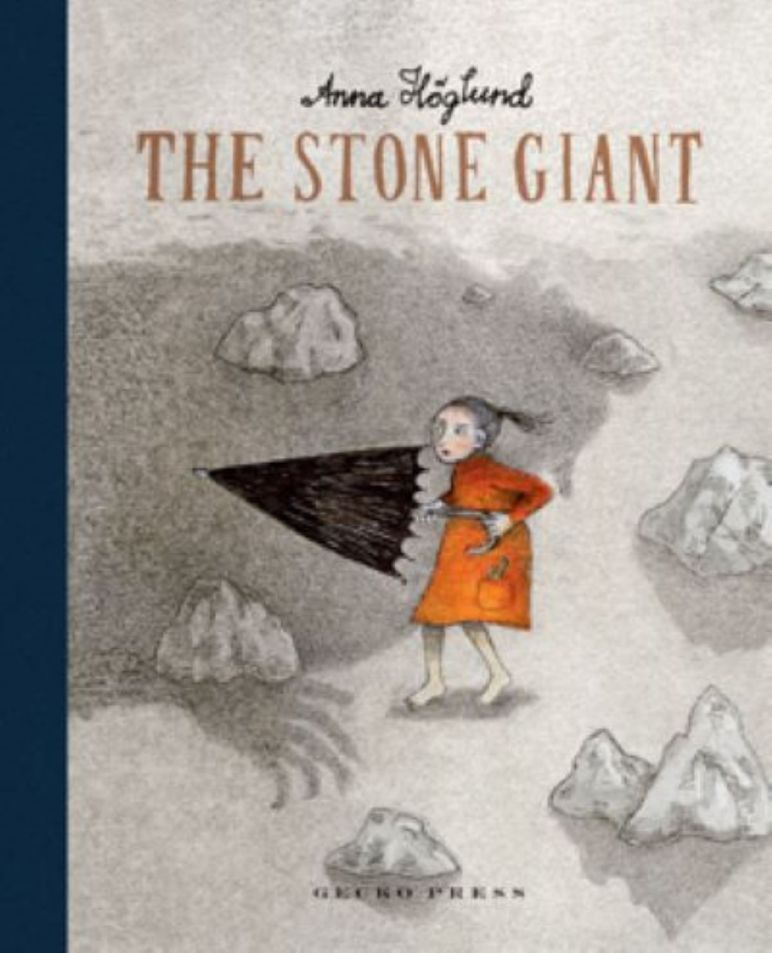 Many of us are familiar with the tropes of Western fairy tales; somewhere in a far off place, there is a damsel in distress, a brave hero, and maybe a fantastical creature to boot. Something untoward then occurs, necessitating a rescue of some sort. There is maybe even some magic, or at least a supernatural event. Everything is resolved, and they all live happily ever after, the end.

Yes, I realize the above gives rather short shrift to fairy tales. Even with modern reinterpretations or new original tales being published, fairy tales are commonplace. It’s ground well trod by readers and writers alike.

The Stone Giant, however, surprised me. Written and illustrated by Anna Höglund, this Swedish import is delightful and clever. At barely over 6.5 inches (16.5 centimeters) by 8 inches (20.2 centimeters), this is an unusual little picture book that uses traditional fairy tale tropes to tell a quietly subversive story. It’s sure to charm children and adults alike.

A young girl lives on an island in the sea (our far off place) with her father, who is a knight. Wearing a full suit of armor and reading a newspaper at the kitchen table, our putative hero tells his daughter that he must go and battle a fearsome giant who is turning people to stone. “‘You’ll have to stay and look after yourself for a while,'” he tells her.

So off he goes with his muskets and swords, leaving his daughter at home. The girl keeps a candle burning in the window to help him find his way back, but it goes out before the knight returns. She ventures out into the dark night and into the ocean, with only a knife and mirror as her belongings. The child swims and swims until she comes to a new land, where there is a gleaming path leading into a forest. She follows the path until she comes to a little house with a light shining in the window.

Inside is an old woman who inquires as to the girl’s destination. The girl replies that she is there to save her father and the other folk turned into stone by the giant. “‘You must eat and rest,'” says the old woman, offering the girl shelter for the night.

But I was wrong! Having rested and eaten, the girl sets out again in the morning, waving goodbye to the kindly and generous old woman. To her knife and mirror the girl adds an umbrella given to her by the old woman, “‘because it’s the giant’s gaze that turns all living things to stone.'”

The reader can predict what all of this has been leading up to: the girl intends to face the giant (the fantastical creature) herself. But how will she be able to best the giant, when so many, including her father the knight, have failed? This is where The Stone Giant surprised me again, not by resorting to magic or superior weaponry, but instead to ingenuity and creativity.

Published by New Zealand’s Gecko Press, this sweet picture book is also a beautiful gift volume. The book is cloth bound, with embossed elements on the spine and its front and back covers. The illustrations were created with copper plate etching and watercolors; there are red pops of color throughout the book, while the watercolors lend a hazy, otherworldly look. The end papers, however, are swirling vibrant masses of green, red, pink, and black. While the illustrations are rather straightforward, there are a lot of small details to pore over.

Translated from the Swedish by Julia Marshall, the text is most accessible to children ages 5 and up. Most of the text is rendered in short paragraphs surrounded by plenty of white space; a child learning to read independently may very well appreciate these shorter bursts of clearly defined text. This book would also make a cozy bedtime read aloud, and can be infused with lots of drama by a willing narrator.

In the classroom, this book would of course be well suited to a unit on fairy tales, and perhaps be used as as writing prompt to encourage young writers to craft their own stories. Because of its small size, this book would not work as well in a large group library story time. I would suggest that one scan the images and print on larger paper, or show the images on a presentation screen, if that is available. It would work just fine in a smaller group, however. If you are neither a teacher or a librarian, and are instead looking for a thoughtful and beautiful gift, The Stone Giant may just fit the bill.

Written and illustrated by Anna Höglund

Translated from Swedish by Julia Marshall

You can purchase this book here.*

Klem-Marí Cajigas has been with Nashville Public Library since 2012, after more than a decade of academic training in Religious Studies and Ministry. As the Family Literacy Coordinator for Bringing Books to Life!, Nashville Public Library’s award-winning early literacy outreach program, she delivers family literacy workshops to a diverse range of local communities. Born in Puerto Rico, Klem-Marí is bilingual, bicultural, and proudly Boricua.