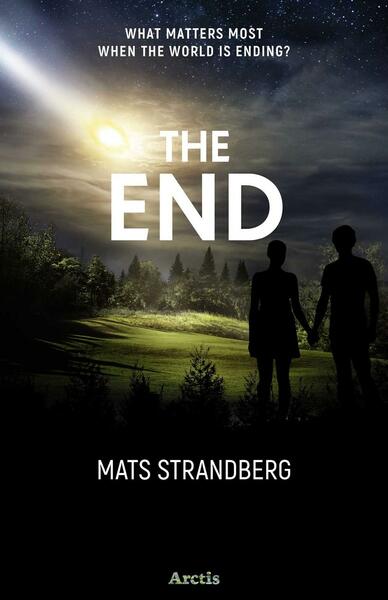 What if the world actually ended with a bang and not with a whimper? (Pace, T.S. Eliot.)  And what if you knew the end was coming? How would you spend your final days?

That’s the premise in The End, an award-winning upper YA novel by Swedish author Mats Strandberg. When the story begins, scientists have just announced that a huge comet named Foxworth will cause the end of the world. And Foxworth—a benign name for such a fearsome celestial body—cannot be deflected.

Everyone has a different reaction. For many, it’s along the traditional carpe diem lines of sex, drugs, and rock n’ roll. There are also the Truthers and deniers. Seventeen-year-old protagonist Simon wants to spend his time with his girlfriend, competitive-swimmer Tilda, instead of with his moms or his pregnant older sister who has moved back home. But Tilda dumps him when Foxworth’s impending arrival is announced:

I still love you, Tilda told me at the beginning of June. It was just days after we first heard about the comet.
She loves me, but it’s not enough.
I just want to live life to the fullest in the time we have left, she’d said.
So do I. But I want to do it with her. To me, Tilda is life. She’s the one I want to be with when the sky turns white.

When Tilda turns up dead, Simon is the prime suspect. With mutual friend Lucinda—who had withdrawn from her friends due to pre-Foxworth chemo—Simon sets out to discover what happened. That embedded mystery gives the story added urgency.

Author Strandberg is known for writing horror and fantasy; there’s a strong flavor of both in this dark pre-apocalyptic tale. Yet in the end, the apocalypse as Strandberg imagines it is all about relationships and who you spend your final moments with.

The End by Mats Strandberg
Translated from the Swedish by Judith Kiros
2020, Arctis Books

Read an interview with the author and the Q&A on his website.

Award-winning opera singer Nanette McGuinness is the translator of over 60 books and graphic novels for children and adults from French, Italian, German and Spanish into English, including the well-known Geronimo Stilton Graphic Novels. Two of her translations, Luisa: Now and Then and California Dreamin’: Cass Elliot Before the Mamas & the Papas were chosen for YALSA’s Great Graphic Novels for Teens; Luisa: Now and Then was also a 2019 Stonewall Honor Book. Her translations released thus far in 2021 are For Justice: The Serge and Beate Klarsfeld Story, The Sisters #7: Lucky Brat, Chloe & Cartoon, LGBTQ YA manga Alter Ego, and A House Without Windows.

One thought on “#WorldKidLit Wednesday: The End”