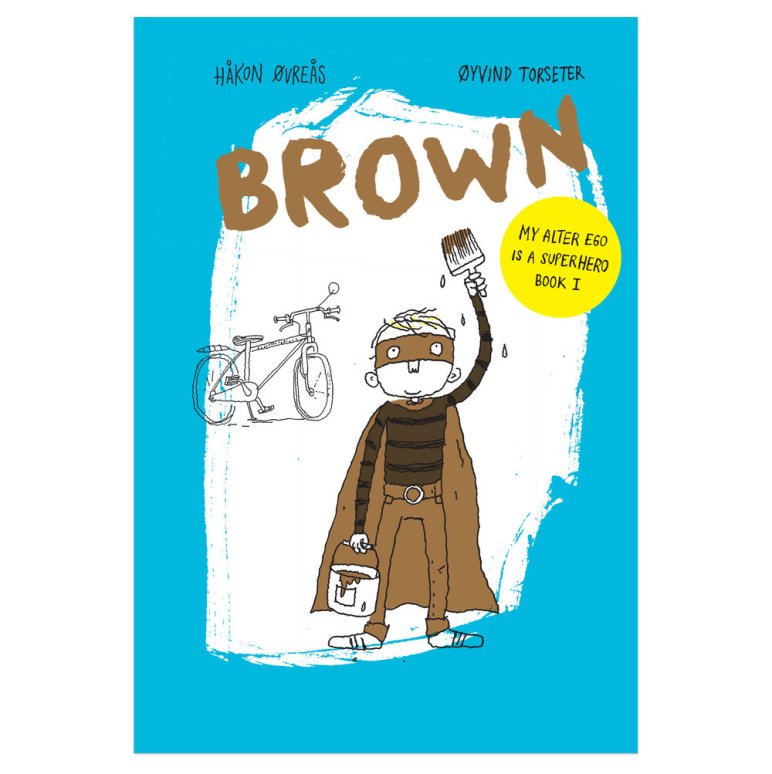 In Brown, a spare, quirky, satisfying book for middle grade readers, we meet Rusty, aka superhero Brown, at a rocky time in his life. His grandfather dies soon after his family moves to be nearby. A group of three bullies—including the minister’s son—destroy the fort that Rusty and his friend Jack have been building.  Rusty only evades the three bullies by hiding at the house of his other friend, Lou. The bullies come to Rusty’s house… and so things continue. His mom is of little help, as she mostly wants the family to fit into their new neighborhood, and his parents are primarily focused on dealing with the “practicalities” of his grandfather’s death.

Aided by his grandfather’s ghost, a giraffe’s ear, his grandfather’s often-inoperable pocket watch, some paint, and his friends Jack (aka Black) and Lou (aka Blue), Rusty gets revenge on the minister’s son while gradually processing his grandfather’s passing. As the net of justice is closing on Rusty and he becomes convinced he will have to turn himself in for his painterly escapades, it turns out that the bullies have painted themselves into a corner and THEY, instead, get caught for their own acts of paint vandalism.

Brown sneaks up on the reader: a small, unassuming novel—much like its protagonist—it captures Rusty’s stoic struggles with a matter-of-factness that reads unerringly true.  The first volume in the much-loved Norwegian My Alter Ego Is a Superhero series, Brown won the 2020 Mildred L. Batchelder Award for children’s books in translation, along with a raft of other well-deserved honors.

Written by Håkon Øvreås and illustrated by Øyvind Torseter
Translated from the Norwegian by Kari Dickson
2019, Enchanted Lion Books

Award-winning opera singer Nanette McGuinness is the translator of 60 books and graphic novels for children and adults from French, Italian, and German into English, including the much-loved Geronimo Stilton Graphic Novels (Papercutz, 2007-17). Two of her latest translations, Luisa: Now and Then (Humanoids, 2018) and California Dreamin’: Cass Elliot Before the Mamas & the Papas (First Second, 2017) were chosen for YALSA’s Great Graphic Novels for Teens; Luisa: Now and Then was also a 2019 Stonewall Honor Book and a 2020 GLLI Translated YA Book Prize Honor Book. Her most recent translations include Little Josephine: Memory in Pieces (Humanoids, 2020), Undead Messiah #3 and Bibi & Miyu, (both TOKYOPOP, 2020) Brina Cat #2: City Cat and The Sisters, Vol. 6: Hurricane Maureen (both Papercutz, 2020).

One thought on “#WorldKidLitWednesday: Brown”