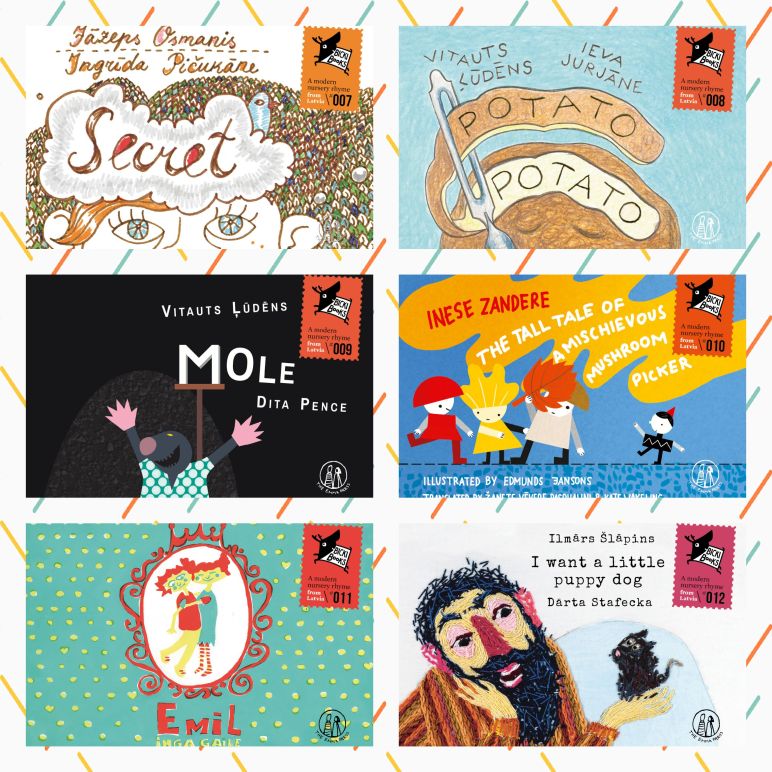 What a wonderful concept! This series of pocket-sized picture books, originally published in Latvian, pairs a classic or modern poem with artwork commissioned from a contemporary illustrator.

I originally highlighted the Bicki-Books (Set 2) in my recommended list of reads for infants and preschoolers, but a two-line mention does not do them justice. These six little books, aimed at children ages three and above, are engaging, refreshing and fun. Potato, Potato features a child’s humorous exchange with . . . some potatoes; the text is conveyed in speech bubbles that bear a striking resemblance to strips of potato peel. In Mole, the eponymous mammal of the title digs a miniature subway system complete with stations (molehills) and drives a little train along the line. A metro map in the end pages shows the all-important stops in the network: little path, rock garden, dill patch, and so on.

Sometimes, the humor of a poem is enhanced by a punchline, such as in Secret, where a little boy has something big to share with his mother and insists that she give nothing away if he tells her. What could that secret be, I wondered? You’ll wonder, too! In I Want a Little Puppy Dog, which is recounted by a grown man in a childlike voice, the darkly funny observation on the final page had me laughing out loud. The comic aspects do not detract from some of the underlying messages of the poems, however. Keeping secrets is important, as is finding a balance in a sibling relationship (as we discover in Emil). Humor can be such as useful tool.

Rhyme, rhythm, and creativity abound in the Bicki-Books, making it easy to forget that these are poems in translation. The Tall Tale of a Mischievous Mushroom Picker is a good example, with brilliant inventions such as ‘scissor-whizzered’ and ‘wander-pondered’, and playful illustrations that enhance the madcap nonsense rhyme. The English editions make clear reference to the poems’ Latvian origins, however, with Latvian postage stamps on the front covers; in Secret, there is even a puzzle inviting readers to find the Latvian word for ‘secret’ by locating letters hidden in the illustrations.

The Bicki-Books series was compiled by Inese Zandere, one of Latvia’s best-known authors and editor-in-chief of publishing house Liels un mazs. Latvian author/illustrator Rūta Briede was responsible for commissioning leading Latvian illustrators to illustrate each poem. There are no fewer than 101 Bicki-Books available in the original Latvian. Here’s hoping we’ll have the chance to explore–and collect–all of them in English translation in due course! Their appealing format makes them a great choice for introducing young children to poetry and a wide range of artistic styles, while enjoying a fun read.

The four Bicki-Books listed above were translated from the Latvian by Kate Wakeling and Žanete Vēvere Pasqualini.

The two Bicki-Books listed above were translated from the Latvian by Kaija Straumanis.

Reviews: Outside in World

Listen to translator Kaija Straumanis read I Want a Little Puppy Dog in Latvian and English as part of this interesting discussion about Latvian literature with publisher Emma Wright of The Emma Press.

Disclosure: Many thanks to Emma Wright of The Emma Press for providing me with copies of the Bicki-Books (Set 2) for review.

Laura Taylor is the founder of world children’s literature blog Planet Picture Book. She is a small business copywriter, NAATI-certified translator of French into English and member of AUSIT and IBBY Australia. When she is not writing, she is reading, and chasing after her two young children.  She tweets regularly @plapibo and posts at www.planetpicturebook.com