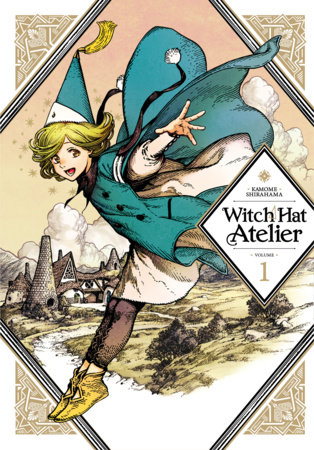 What if the thing you most yearned to do was an innate ability? And you weren’t one of the lucky ones born with it?

That’s the set up for Witch Hat Atelier, a wonderful YA coming-of-age manga series by Kamome Shirahama, translated by Stephen Kohler, the first volume of which just won an Eisner Award for the Best U.S. Edition of International Material—Asia. (The Will Eisner Comic Industry Awards are the comics world’s Grammys or Oscars.) Reminiscent of the much-loved Studio Ghibli movies, Witch Hat Atelier is filled with fantastical, old-fashioned, luxuriant pen-and-ink drawings. The English-language edition is up to its sixth volume—the seventh is due out in December—and the Eisner win should have come as no surprise to its many fans. Count me one of them.

In this first volume, Coco, a simple tailor’s daughter, dreams of being a witch but has no magic. It seems the stuff of dashed hopes and despair, except that one day she stumbles onto the truth by watching magic being performed: anyone, it turns out, can do magic. Coco becomes an apprentice witch, albeit at a great disadvantage due to her lack of previous training and society’s rules and basic prejudice against her. But she perseveres, driven by the need to undo the first, disastrous spell she accidentally cast, which turned her mother into stone.

Comics, illustration, and visual art are inherently magic, mysteriously transforming mundane ink and paper into new universes and worlds via the artist’s skill and training. Which is a major theme and the guiding metaphor in this wonderful manga, as the magic that the witches create within the book is done by drawing with pen and ink, mirroring the magic that the mangaka (manga artist) has evoked by creating the story with her own pen and ink. What a lovely conceit!

That the art is beautiful and the story engaging almost seems like icing on the cake—but indeed, they are.

Translated from the Japanese by Stephen Kohler

Award-winning opera singer Nanette McGuinness is the translator of over 50 books and graphic novels for children and adults from French, Italian, and German into English, including the well-known Geronimo Stilton Graphic Novels. Two of her latest translations, Luisa: Now and Then (Humanoids, 2018) and California Dreamin’: Cass Elliot Before the Mamas & the Papas (First Second, 2017) were chosen for YALSA’s Great Graphic Novels for Teens; Luisa: Now and Then was also a 2019 Stonewall Honor Book. Her most recent translations are Little Josephine: Memory in Pieces (Life Drawn, 2020), Super Sisters (Papercutz, 2020), and Undead Messiah #3 (TOKYPOP, 2020).