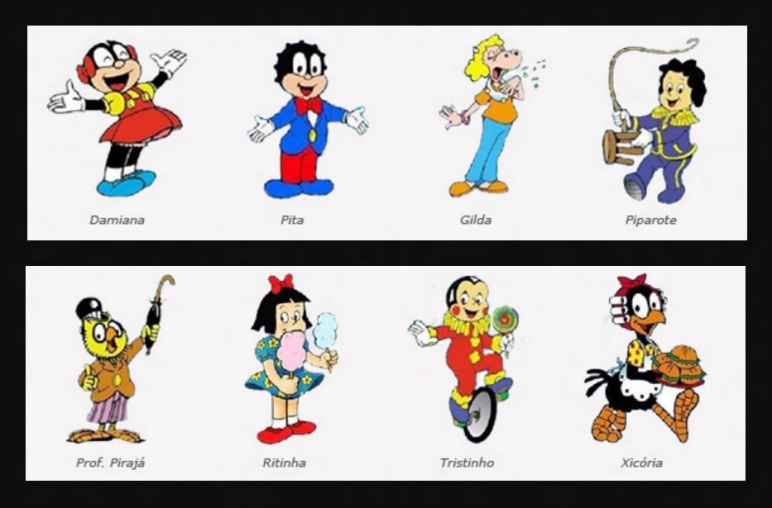 (Illustration: A group of famous children’s characters of Brazil created by Daniel Azulay who passed away in March due to complications from COVID-19)

Children’s literature has an important influence on the formation of collective imagination in Brazil. I will try to summarize in this post some of the highlights of this rich tradition.

Clarice Lispector’s children’s book The Women Who Killed The Fish (A mulher que matou os peixes) will be published in 2021 with Benjamin Moser’s translation. Lispector, although better-known for her novels and short stories, wrote a number of children literature titles among them O Mistério do Coelho Pensante (The Mystery of the Thinking Rabbit), A Vida Íntima de Laura (Laura’s Intimate Life), Quase de verdade (Almost True), Como nasceram as estrelas: Doze lendas brasileiras (How the Stars were Born: Twelve Brazilian Legends).

The publisher of the book, New Directions, describes the book as follows:

“That woman who killed the fish unfortunately is me,” begins the title story, but “if it were my fault, I’d own up to you, since I don’t lie to boys and girls. I only lie sometimes to a certain type of grownup because there’s no other way.” Enumerating all the animals she’s loved―cats, dogs, lizards, chickens, monkeys―Clarice finally asks: “Do you forgive me?” “The Mystery of the Thinking Rabbit” is a detective story which explains that bunnies think with their noses: for a single idea a bunny might “scrunch up his nose fifteen thousand times” (he may not be too bright, but “he’s not foolish at all when it comes to making babies”). The third tale, “Almost True,” is a shaggy dog yarn narrated by a pooch who is very worried about a wicked witch: “I am a dog named Ulisses and my owner is Clarice.” The wonderful last story, “Laura’s Intimate Life” stars “the nicest hen I’ve ever seen.” Laura is “quite dumb,” but she has her “little thoughts and feelings. Not a lot, but she’s definitely got them. Just knowing she’s not completely dumb makes her feel all chatty and giddy. She thinks that she thinks.” A visitor with one eye from Jupiter arrives and vows Laura will never be eaten: she’s been worrying since “humans are a weird sort of person” who can love hens and eat them, too. Such throwaway wisdom abounds: “Don’t even getting me started.” These delightful, high-hearted stories, written for her own boys, have charm to burn―and are a treat for every Lispector reader.”

Ana Maria Machado who is at the same time a journalist, opened up the first children bookshop in Brazil: Malasartes. Her story “Menina Bonina de laço de fita” has been translated into English in 1986 with the title “Nina Bonita: A Story”. Its focus is the coexistence of ethnic groups. The story is about a white and a black rabbit who marry. Writing during the time of the dictatorship Ana Maria Machado’s stories have political undertones which were blended with humor. One of those stories is the well-known “Era uma vez um tirano” (Once upon a time there was a tyrant) published in 1982. Machado’s unique style involves touches of magical realism. She plays with the fairy tale structure, turning the tales upside down, starting with the end, and ending with “once upon a time”.

Brazilian writer Lygia Bojunga Nunes is also a recipient of Hans Christian Andersen award. Using magical realism and social critique just like Machado, Nunes writes from the point of view of children. She started to write children literature in 1972. In English, she has two books available. My Friend the Painter is a novel of a young boy, Claudio, and his friendship with a painter who teaches him to see the world through the eyes of an artist. The Companions tells the story of three animals–a rabbit, a bear, and a dog–finding one another, learning a lesson in independence, and discovering the joys of friendship and the pain of separation.

Nunes won The Astrid Lindgren Memorial Award as well. In the award website her literature is described as follows:

“Brazilian children’s literature is renowned for a marked erosion of the boundaries between fantasy and reality. Lygia Bojunga is a writer who has developed and perfected this tradition. For her, magic permeates the everyday: an everyday where desires grow so heavy that one literally cannot lift them, where safety pins and umbrellas talk, as do spinning tops and balls. The lives of animals are as varied and as vulnerable as those of any human being. Imperceptibly, what is palpably real transforms into something new, not so much another world as a world inside the sensory, where the boundaries of what is possible are blurred and easy to transcend. In Bojunga’s work, sorrow coexists with comfort, tranquil happiness with breathtaking adventures. At the heart of this poetic fantasy is the child, often abandoned and lonely, always sensitive and possessed of a vivid imagination. Neither death nor betrayal are taboo, yet just around almost every corner, healing is at hand. She paints her pictures in lyrical, colourful prose, and no matter how bitter loneliness may feel, there is always the smile that expresses empathy with the young and is never sentimental.”

Ruth Rocha is also one of the leading exponents of children’s literature in Brazil. One of her best-known works is Marcelo, Marmelo, Martelo, which has sold more than two million copies. She has around 130 published titles and has been translated into more than twenty-five languages.  Her book in English titled Lines, Squiggles, Letters, Words is described by its publisher as follows: “A child who has not yet learned how to read looks out at the world and sees language as such a child would: as lines and squiggles that don’t exactly make pictures but don’t seem to make anything else either. Then, when the child starts to go to school and begins to learn his letters, his way of seeing begins to change.”

Eva Furnari is an Italian–Brazilian children’s book writer and illustrator. Furnari collaborated in the children’s section Folhinha of the newspaper Folha de S.Paulo, and created a famous children’s character, “Bruxinha”. Furnari’s book in English Fuzz McFlops is translated by Alison Entrekin. It tells the story of “one of the most famous rabbit-writers in the land, but ever since his classmates teased him about his lopsided ears at school he’s lead a lonely life, writing sad stories”. Furnari also illustrated a book that is translated into English: Mamita Monstruo. The book is written by Lia Zatz.

To this list, we can also add Cecilia Meireles who is known in Brazil primarily as a poet, but she was also a children’s writer. Some of her most famous works for children are “O Cavalinho Branco”, “Sonhos de Menina”, and “O Menino Azul”.

About the Guest Editor:

Basak Bingol Yuce is a world literature scholar, journalist, and literary translator based in the US. She holds a PhD degree in comparative literature from Binghamton University. One of her areas of study is Brazilian literature. Dr. Yuce’s journalistic work focuses on literary and international journalism. She is a regular contributor to Turkish media outlets. Dr. Yuce translated books and articles from English, French and Portuguese into Turkish, among them the works of Clarice Lispector, Terry Eagleton, Antonio Candido, André Aciman, Ken Bruen, and Harold Bloom.

One thought on “Children’s Literature in Brazil”