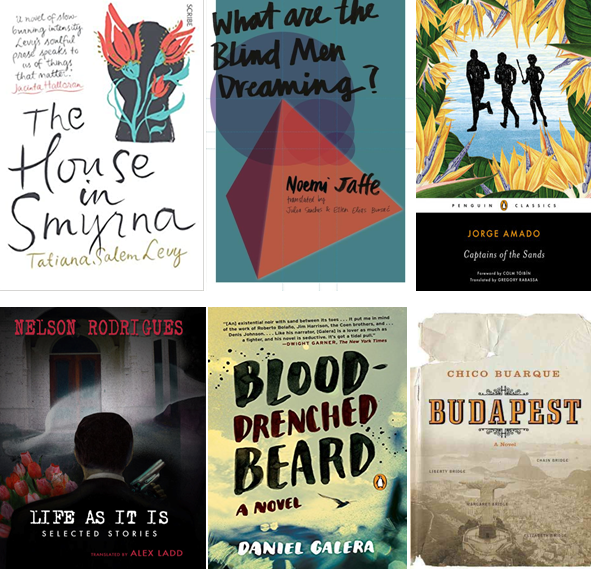 Staying home can be an opportunity to discover new literary worlds. Here are some picks from Brazilian literature that are available in English.

What are the Blind Men Dreaming by Noemi Jaffe.

“Three generations of women reflect, in their own words, on the Holocaust and bearing witness in Jewish and Brazilian identity. In this multi-generic book, the individual voices of three generations of women—mother, in the diary she wrote after liberation from Auschwitz and Bergen-Belsen; daughter, considering the power of memory and survival; and granddaughter, reflecting on what it means to be the granddaughter of a Holocaust survivor—combine in an unparalleled use of literature as a means to bear witness.” (Publisher’s Description)

Translated from the Brazilian Portuguese by Julia Sanches and from the Serbian by Ellen Elias-Bursać. Deep Vellum, 2012.

To read an Excerpt: http://deepvellum.org/product/what-are-the-blind-men-dreaming/

“Perhaps Brazil’s most influential and beloved composer and musician, Chico Buarque is also a highly praised poet, playwright, and novelist. In Budapest, Buarque introduces the story of a ghostwriter who immerses himself in the Hungarian language. José Costa lives in Rio de Janeiro. Fated to remain in the shadows of his illustrious clients, Costa breaks free of this fate and spontaneously buys a ticket to Budapest. In the city by the Danube, he falls in love with a strangely enchanting woman named Kriska, who offers to teach him the Magyar language in the most intimate of ways. First, however, he must observe the old proverb “There is no life outside Hungary” and abandon his thoughts of samba, sunbathers on Ipanema, Sugarloaf Mountain, and his wife in Rio, to turn himself over to a strange, hallucinogenic world of pumpkin rolls, late-night discos in old Buda, endless bottles of Trojak wine, and, of course, Kriska, the willful seductress and disciplinarian who is as hard to fathom and tame as the language she speaks. But what will become of José, now Zsoze, when his time in Budapest comes to an end and life as he knows it is turned upside down?” (Publisher’s Description)

Captains of the Sands by Jorge Amado

“A “Brazilian Lord of the Flies, about a group of boys who live by their wits and daring in the slums of Bahia

They call themselves “Captains of the Sands,” a gang of orphans and runaways who live by their wits and daring in the torrid slums and sleazy back alleys of Bahia. Led by fifteen-year-old “Bullet,” the band—including a crafty liar named “Legless,” the intellectual “Professor,” and the sexually precocious “Cat”—pulls off heists and escapades against the right and privileged of Brazil. But when a public outcry demands the capture of the “little criminals,” the fate of these children becomes a poignant, intensely moving drama of love and freedom in a shackled land.

Captains of the Sands captures the rich culture, vivid emotions, and wild landscape of Bahia with penetrating authenticity and brilliantly displays the genius of Brazil’s most acclaimed author.” (Publisher’s Description)

Life As It Is by Nelson Rodrigues

“Still relatively unknown in the United States, Nelson Rodrigues (1912 -1980) is considered by many to be Brazil’s greatest playwright. The fifty-eight stories in this collection are gathered from his newspaper column, A Vida Como Ela E (Life As It Is). Written in the 1950s, these stories have since been republished numerous times in Brazil, where they have been adapted for theater, television and cinema. Available in English for the first time, the book provides a beguiling showcase for the mordant wit and biting insights of one of the twentieth century’s most singular talents.” (Publisher’s Description)

The House in Smyrna by Tatiana Salem Levy

“An unforgettable story from one of Brazil’s most accomplished and original new voices, this is a profoundly moving portrait of a young woman finding her way back into life.

In Rio de Janeiro, a woman suffering from a mysterious illness, which is eroding her body and mind, decides to accept a challenge from her grandfather: to take the key to the house where he grew up―in the Turkish city of Smyrna―and open the door.

As she embarks on this pilgrimage, she begins to write of her progress. The writing soon becomes an exploration of her family’s legacy of displacement in Europe, told in several narrative strands. Sifting through family stories―her grandfather’s migration from Turkey to Brazil, her parents’ exile in Portugal under the Brazilian military dictatorship, her mother’s death, and her own love affair with a violent man―she traces her family’s history in a journey to make sense of the past and to understand her place in it.

With an epic sweep of time and place―traversing Brazil, Turkey, and Portugal―this is a profoundly moving portrait of a young woman finding her way back into life. Spare, heartfelt, and evocative, The House in Smyrna is an unforgettable story from one of the most accomplished and original new voices in Brazil.” (Publisher’s Description)

Translated by Alison Entrekin, Scribe US, 2018.

“Steeped in a very special atmosphere, both languid and tense, and soaked in the sultry allure of south Brazil, Daniel Galera’s masterfully spare and powerful prose unfolds a story of discovery that feels almost archetypal—a display of storytelling sorcery that builds with oceanic force and announces one of Brazil’s greatest young writers to the English-speaking world.” (Publisher’s Description)