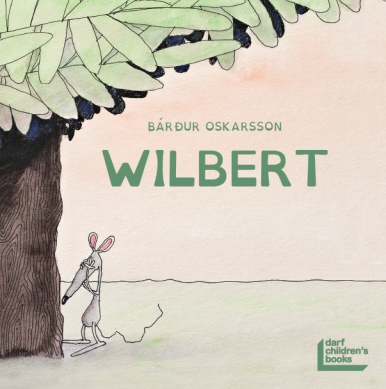 At first glance, Wilbert is a short, easy read. Everything about the book is simply laid out, from the one-word title to the uncomplicated text on each page. The illustrations appear straightforward too, with their minimal backdrops and small cast of characters. Not much can beat a good game of hide-and-seek and it’s fun accompanying Rat as she looks for her friend Wilbert, especially when author Bárður Oskarsson chooses to include Crocodile in the mix.

It is Crocodile that turns this seemingly simple picture book into something a little more complicated. She offers to help Rat look for Wilbert, but she cannot see him, even when Rat tells her that Wilbert is standing right in front of her. We can see Wilbert too, only a little at first, but he is gradually revealed in full. He’s a huge creature – you really can’t miss him, which begs the question: Why is it that Crocodile cannot see Wilbert?

My main theory revolves around real and imaginary friends. Is Wilbert an imaginary character, I wonder, or is Crocodile, or both of them? Perhaps they only exist in Rat’s mind to keep her company on an otherwise dull day. And then I have a quiet chuckle to myself, because Wilbert is a work of fiction; the characters are all imaginary! Incidentally, my daughters (ages 5 and 7) do not buy into my theory. They are convinced that Crocodile cannot see Wilbert because she is looking in the wrong direction, and I have to say, they might have a valid point here.

I am a fan of Bárður Oskarsson’s quirky, humorous illustrations – the super-expressive trio of animal characters outlined in fine black ink, the muted pastel palette, simple backdrops, and subtle changes in perspective. Each illustration takes up a full page, and there are more under the text on the opposite side: A whole other story in miniature black-and-white line drawings, in fact. I did wonder if there was a hidden clue in this additional storyline (one illustration shows a tiny discarded pair of spectacles . . .), but it has so far eluded me!

If you are after a fun, original read that really makes you think, then have a look out for Wilbert.

Bárður Oskarsson is an award-winning artist, author and illustrator from the Faroe Islands. He has seven children’s books to his credit, all published in translation by Darf Children’s Books. He has also illustrated books by other Faroese authors.

Marita Thomsen is the translator into English of all seven children’s books by Bárður Oskarsson. She is also a conference interpreter. Born in the Faroe Islands, she is now based in London.

This is an edited version of a post originally published on Planet Picture Book in February 2019.

Laura Taylor is the founder of world children’s literature blog Planet Picture Book. She is a small business copywriter, NAATI-certified translator of French into English, member of AUSIT and IBBY Australia. When she is not writing, she is reading and chasing after her two young children.  She tweets regularly @plapibo and posts at www.planetpicturebook.com

One thought on “Wilbert”