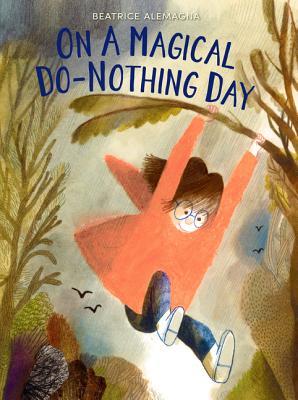 Beatrice Alemagna has written so many brilliant picture books! My personal favourites include The Marvellous Fluffy Squishy Itty Bitty and A Lion in Paris, and this one: On a Magical Do-Nothing Day. The theme of technology vs. nature, in particular, really strikes a chord with me.

The storyline is simple: It’s a rainy day and a young boy and his mother arrive at a cabin in the middle of a forest. Boy settles down with a video game, mum confiscates game console, boy finds it and goes outside where – shock, horror! – boy accidentally drops the console in a freezing cold pond. When he starts to look around, he experiences a natural world that is alive with beauty.

What a wonderful, not to mention important, theme for our times! I’ve read countless articles on the downsides of extensive screen time for children, as well as the benefits of free-range play in the great outdoors. And it’s not just about children either; we adults are just as guilty, if not more so, of losing ourselves in technology. I love the gentle irony of the mother in On a Magical Do-Nothing Day taking her son’s game console away, while she herself has been tapping away on her laptop with her back turned to the room.

The real joy of this book for me, however, is the young boy’s awakening to the joys of nature and the magic he experiences in the everyday: the jelly-soft touch of snail antennae, the smell of mushrooms, the feel of the earth, and awareness of bugs he has never seen before. Sure, these are little things, but together they represent a magnificently rich sensory tapestry. So much for ‘this boring, wet place’ the young boy thought he was venturing into when he headed outside!

The illustrations are truly magnificent. Dark, moody textured backdrops are enlivened by the fluorescent orange of the young boy’s jacket, warm earthy tones, and sunbeams that filter through the rain clouds. There are quirky touches sprinkled throughout, like seeds and grains with smiling faces, and an army of Martians clambering out of the game console. And I love the scene at the end where mother and son look at each other over mugs of hot chocolate – with no screens to distract them.

On a Magical Do-Nothing Day is a valuable reminder of what really matters: family, together time and a wider appreciation of the beautiful nature that surrounds us.

The Book
On a Magical Do-Nothing Day by Beatrice Alemagna, translated from the French by Jill Davis (HarperCollins [US], Thames & Hudson [UK], 2017)

The Author/Illustrator
Beatrice Alemagna decided she wanted to be ‘a painter and writer of novels’ at the age of eight. She has now published more than 30 children’s books. She has received many accolades for her work, including a Mildred L. Batchelder award and five selections for the prestigious White Ravens list. Born in Bologna, she is now based in Paris.

The Translator
Jill Davis is a writer, writing teacher and executive editor at HarperCollins in the United States.

This is an edited version of a post originally published on Planet Picture Book in November 2018.

Laura Taylor is the founder of world children’s literature blog Planet Picture Book. She is a small business copywriter, NAATI-certified translator of French into English and member of AUSIT. When she is not writing, she is reading and chasing after her two young children.  She tweets regularly @plapibo and posts at www.planetpicturebook.com

3 thoughts on “On a Magical Do-Nothing Day”