This is the first in the European section of the month of older women in fiction around the world. Recommended by Deborah Levy, introducing this English version, she characterises the novels of Violette Leduc as works of genius and also a bit peculiar. She claims that Leduc was ‘rearranging the social and sexual scaffolding of her time.’

I found this novel and the lady of the title quite unsettling but also very rewarding. These are good things to find in any novel. They are good for this series because it means that our ideas about older women are being challenged. 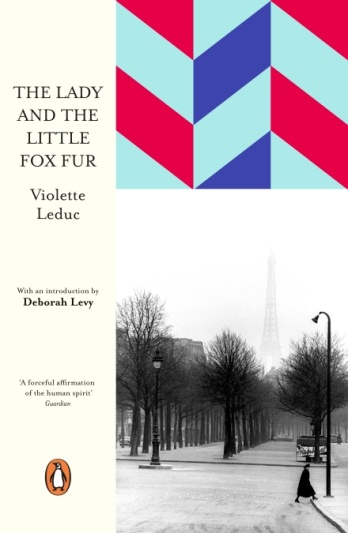 The Lady and the Little Fox Fur by Violette Leduc

The lady of the title is in her 60s and lives alone with no income, in a room in Paris under the noisy Metro line. We never learn her name, nor anything much about her previous life, nor why she is in the position she is. We intuit that she never married, has no children, never had a profession and has few if any surviving friends.

It is the sensation of hunger, of loss of a future, or everyday connection to the rhythms of busy Parisian life that concerns the old lady of the title. (viii)

These three connected sensations occupy the short novel. Each on its own would make a sad story, but Violette Leduc’s lady suffers all three. She is weak from hunger, near the end of her life, but she is attempting to gain human warmth from going onto the streets and into the metro.

As a result, this short novel is in part a wonderful evocation of Paris, night and day, its undersides, the sounds of the streets at night, the light on the river, the metro stations, the streets. As she walks the lady comments on or speaks to everything, animate and non-animate. Memories, small incidents are savoured to give spice to her life. Here is an example of her auditory world.

One night, as a train was fleeing from winter outside her attic, a window had been opened by five or six bars of trumpet playing. Then the window closed again. The diamond winter and the glittering brass. She remembered it still in summer, in the gardens of a square, and she thought of herself as the chosen one of winter. She waited for the brazen blare of jazz again, the first night of frost, but the window would not light up. (26)

Once she is aching for a sip of orange juice and searching for oranges in the rubbish she finds an abandoned fox fur. She adopts the fox, imbuing it with life and love for her. Eventually she realises she is so poor she must sell it. But her attempts bring her contempt and rejection. She realises that the fur must stay with her, must be warmed by her.

In the loneliness and cold of the night she experiences great discomfort, as she tells her feet.

My temples, my stomach she groaned, addressing the words to her feet, two warm strangers. Her eyes were misting over, her heart was talking on her lips. To need everything when everything is finished. She no longer knew whether she was sad or whether it was hunger. (28)

Something about the lack of inhibition in an older person allows them to make observations that are considered a bit unsavoury and downright funny. The lady’s billing and cooing at the fox, for example reminds us of how women have always been expected to address foxy gentlemen.

There is a hallucinatory quality to this novel. The woman frequently addresses inanimate objects, implies that they have spirit, life, and that everything in Paris is responding to her actions. While we know that at one level this is delusional, we are also required to see that some of our own behaviour is similar, although we may not be as hungry as this old lady.

The Lady and the Little Fox Fur by Violette Leduc was first published in Paris in 1965. I read the Penguin European Writers edition, of 2018, with an introduction by Deborah Levy. 80pp. Translated from the French by Derek Colman.

Posted by Caroline Lodge of Bookword