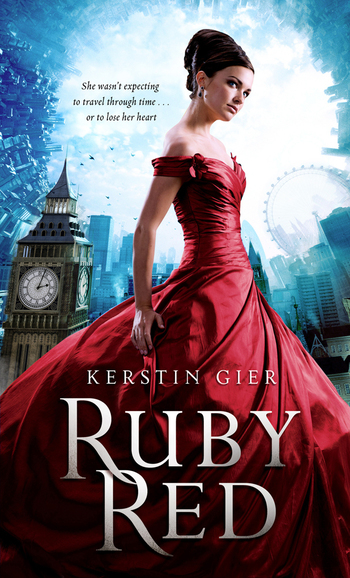 Like YA fantasy filled with fencing, derring-do and a dash of romance?  Historical fiction replete with counts and conspiracies? Urban paranormal novels about time traveling?

Then have I got a fabulous novel-in-translation for you…

While this may sound like a mashed-up, genre-bending smorgasbord of a book lost in an endless search for identity, Ruby Red is anything but.  This wonderful coming-of-age story by German author Kerstin Gier, translated by the inestimable Anthea Bell, was deservedly chosen for the American Library Association’s 2012 Best Fiction for Young Adults list.

Set in modern-day London, Ruby Red is the tale of Gwyneth Shepherd, who unknowingly carries the rare family gene for time traveling.  Why unknowingly?  Gwyneth’s mother wanted to give her a normal childhood—although the family is far from normal. She also wanted to protect her daughter from the machinations of the secret society that governs the mysterious device that controls time travel for those few who are doomed to travel through time.  With the birthdate of the next “carrier” already determined by Sir Isaac Newton—no less!—Gwyneth’s mom had bribed the midwife to shift Gwyneth’s date of birth forward by one day, so that her superior, snarky cousin, Charlotte, would spend her childhood being tediously groomed as the heir apparent (i.e., years of extra classes on etiquette and historical minutia vs. playgrounds and social media),  rather than Gwyneth. What could go wrong? There was only a 50-50 chance that Gwyneth would inherit…

At the age of sixteen, Gwyneth surprises everyone when she unwittingly begins to travel through time, turning out to be not at all the plain-jane teen she and everyone else thought she was.  The rest, as they say, is history.

Anthea Bell’s seamless translation (the original was published in German as Rubinrot in 2009) reads as if the novel had been written by a writer of the British empire, as opposed to originally in another language, which makes the story pure fun to read.  (Sadly, Bell, a multiple-award-winning literary translator of German, French, and Danish into English, passed away in 2018.)

Ruby Red is the first volume in a trilogy (with Sapphire Blue and Emerald Green following). So if you enjoy the book as much as I did—a one-gulp savor in my case—you’ll want to segue right away into the next volume.

Translated from the German by Anthea Bell

Reviews from Kirkus, Publishers Weekly, and The New York Times.

Award-winning opera singer Nanette McGuinness is the translator of over 40 books and graphic novels for children and adults from French and Italian into English, including the well-known Geronimo Stilton Graphic Novels. Her latest translations, Luisa: Now and Then (Humanoids, 2018) and California Dreamin’: Cass Elliot Before the Mamas & the Papas(First Second, 2017) were chosen for YALSA’s Great Graphic Novels for Teens.