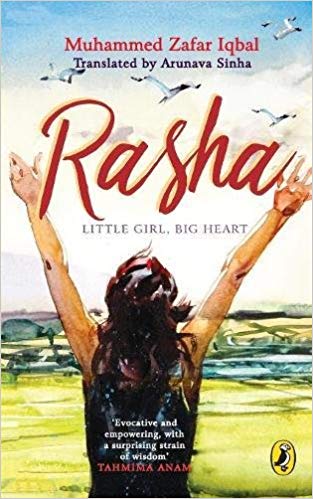 The breathtaking story of a feisty young girl. Fifteen-year-old Rasha is abandoned by her mother in a village with her aged and probably mad grandmother. Uprooted from her school and her friends back in cosmopolitan Dhaka, a disgruntled Rasha has to start life afresh in a faraway place with no electricity, incessant rains, nosy neighbors, and a primitive school. Refusing to resign to the circumstances, Rasha rises against them and turns indomitable. Exposing a bullying teacher, nipping a child marriage in the bud, learning to take a boat to school and teaching her classmates how to use computers – these are only a few of this young girl’s incredible exploits! But just as Rasha settles into her new life, new friends in tow, she is confronted by a nightmarish past that once ravaged her family. Will Rasha survive this daunting, and astounding, adventure?

Author
Muhammed Zafar Iqbal is the best-known writer of science fiction and of children’s books from Bangladesh. His books have earned him numerous awards, including the prestigious national Bangla Academy Award.

Translator
Arunava Sinha has thirty-five Bengali-to-English published translations in fiction, nonfiction, poetry, and children’s literature. He is a two-time winner of the Crossword Prize for translated books.