Two years ago, The Battle for Home : Memoir of a Syrian Architect was released in the English language by Thames & Hudson publishers in London. The writer, Syrian architect Marwa al-Sabouni, shared in her book illustrations for the architectural buildings in her city, Homs, the third largest city in Syria. She wrote about the city situation that was greatly affected by the war, where both the buildings and infrastructure were destroyed – both at the same time. Also, she narrated in her book a few personal stories – she has experienced them firsthand, and forged these observations in a unique style where she asked a lot of questions.

Ms. Al-Sabouni focused in her book on the Baba Amar neighborhood of Homs, Syria. This neighborhood witnessed a previous plan by the Syrian goverment for reconstruction. The plan was to build separate buildings and residental towers; these solutions are in many Arab and European countries – unfortunately. The writer introduced a proposal to build triangular settlements that can absorb future population growth; and she designed natural bridges between the flats, taking in consideration the privacy of the buildings and respecting the urban fabric of traditional old Homs.

She then considered side streets, respecting neighborhoods, and the strong and intimate architectural and human relationships that connect the neighborhoods. The writer participated in the UN Habitat contest. She won the prize in 2014. Her main project idea depended on a creative essential unit adopted from the design of a tree where the building can expand and grow like the tree does. Through this architectural idea we can create conceptions that take us back to the traditional Arab houses designs that already existin the Baba Amr neighborhood. With that design, we can see al-Sabouni’s respect for the old urban fabric of the city while adding new ideas that suit our modern buildings.

Marwa al-Sabouni’s book doesn’t talk about the city before and after the war only. She referred to the reasons of the war: like poverty, and dividing the inhabitants according to the sect of some of the neighborhoods. This has made the war very harsh and tough. After that, she introduced plans and proposals for rebuilding the city, Homs; especially, the Baba Amr neighborhood. Ms. Al-Sabouni asked in her book a lot of questions related to Syrians after the war:

“The question that bewilders any architect who wants to do something – where am I going to start? How can we recover? How can we avoid the trap of empty circles of bad choices? How do we respect the law? How do we avoid divisions? How do we fix the broken pieces? What should we keep and what shouldn’t we keep?

She adds, ‘’I keep thinking about these questions and I look to remnants of this city with its open wounds and I still notice the angry faces that put the blame on each other.’’

The architect says what we can learn from this meaningless war is the solutions have to come from inside ourselves – during the recovery process. Architecture is an art. It has a value, as any other thing we can do. We can’t get better by replacing the random buildings with towers that have no sense. We do need a common house. The writer seems optimistc even if a little later she wrote: “I ask myself how can architecture close the wounds? I don’t think it has a chance and that led us simply to witness that wounds recover by themselves. The wounds made the city a block of scars.’’

Also, she showed in her book the city’s architectural history and what it has witnessed from development, expansion and distortion since the 18th century. For example, where the city doors have been destroyed and then imported designs appeared, which were far from the original building fabric. The new streets that were created inside the city led to the distortion of the rich traditional society. Illegal residental towers and buildings have appeared. Before that, the city had a harmonious architectural fabric where the religious, commercial and residental buildings were well connected with each other according to the importance and the privacy of each street and side street.

This is the situation in many Islamic traditional cities, which takes into consideration the humans’ and the city placeswhere city inhabitants can meet in green squares and public places. Those places played an important role to strengthen the relationships between city inhabitants, even though they have different religions and sects. The city building fabric regression started with the French occupation.This happened between 1921 – 1946, where many traditional buildings were replaced by buildings of cement blocks. In addition, the city witnessed an immigration, where separated neighborhoods began to appear that were isolated from the city. Of course, that isolation enhanced the spread of class differences and sectarianism in the city.

Ms. Al-Sabouni focused on the importance of the concept of the Islamic architecture identity. Modern architecture can’t be limited to using some traditional architecture vocabularies and connecting them with each other randomly. Architects need to take care of the nature of the place, too. The writer called to transform the architecture schools, Architecture Faculties, towards a new scope, which depends on studying the reality of the things that are conncted with daily life as the building ingredients, using the interaction between light and shadow, feeling the details, plus other important things.

Finally, I found this book a bold, good and useful experience. There is a variety in her book’s subjects which are related to city history before the war, and some reasons that led to the war, – in order, to pitch some ideas and proposal for the post-war period. 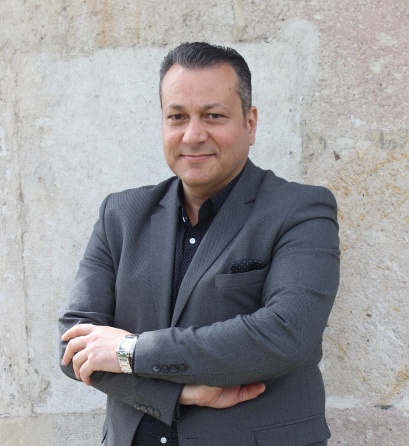 Mahmoud Zain al-Abidin is a professor at Yildiz Technical University where he teaches history of Ottoman architect. Prof. Mamoud Zain al-Abidin is a writer of eight architectural books.  In 2008 he won Sheikh Zayed Book Award for his book, Architecture of Ottoman Mosques. He is an expert at ICOMOS. He was a technical adviser for Turkish Cooperation and Coordination Agency. Currently, he lives in Istanbul, Turkey.

Marwa Al-Sabouni was born and raised in Homs/Syria in 18/9/1981. She has holds a PhD in architecture. She has written several architectural articles which were published at RIBAJ, Architectural Review, Wall Street International Magazine and other outlets and some of them were translated into German and French. She is the author of The Battle for Home published internationally in April 2016 by T&H. This work has been widely covered by the mass media including cover story in the Guardian, Financial Times, The Times, The Huffington Post, New York Times, BBC Radio(s) several flagship programs, CNN, and many other in UK, AU, USA, and Europe. It was reviewed in TLS, Fraser Institute, Open Democracy, LA Book Review, The Christian Science Monitor and many others. The book was selected by the Guardian as one of the best architectural books in 2016.