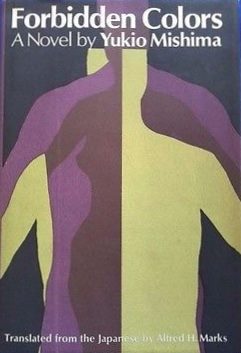 The #TA60 list of classics in translation celebrates the 60th anniversary of The Society of Authors Translators Association by acknowledging the translators who rewrote these great books so anglophone readers could enjoy them. Please share, and remember: always #namethetranslator!

FORBIDDEN COLOURS by Yukio Mishima was translated from the Japanese by Alfred H. Marks and published in English in 1968, two years before Mishima committed seppuku (ritual suicide) after an attempted coup d’état. The Japanese title, ‘Kinjiki’, refers to colours that people of certain ranks were not allowed to wear at the Japanese court. ‘Kinjiki’ combines the kanji 禁 ‘forbidden’, and 色 ‘colour’ – but 色 can also mean ‘erotic love’. Thus the title is a euphemism for homosexuality. In FORBIDDEN COLOURS an ageing, misogynistic man takes revenge on the female sex by manipulating a handsome young man who marries for money but lacks the ability to love.

The translator, Alfred H. Marks, developed an interest in Japan as a result of his service there with U.S. military intelligence during World War II. A professor of English literature, he returned as a Fulbright scholar in 1965 and subsequently translated modern Japanese literature, particularly the work of Mishima.

Other first-time publications in English translation in 1968 include the Danish cult classic HAVOC by Tom Kristensen, translated by Carl Malmberg. The tale of a disaffected man of letters spiralling into alcoholism and self-destruction, author Karl Ove Knausgård describes it as ‘one of the best novels ever to come out of Scandinavia’.

And there’s another great work by our 1966 author, the Norwegian master Tarjei Vesaas: THE BIRDS, translated from Nynorsk by Torbjørn Støverud and Michael Barnes. Here’s the opening paragraph, because it’s beautiful:

‘It was evening. Mattis looked to see if the sky was clear and free of cloud. It was. Then he said to his sister Hege, to cheer her up: “You’re like lightning.”’