Time is a man

Time is the golden penny
of an aristocrat with a cane –

the old bloke, who writes nights
in his office.
he keeps a clock inside himself,
measures
hundreds and more –
autopsies under the magnifying glass of the dead.
Time’s cut up with a sword,
little man, a nailed coffin
out of female non-attendance –
vengeance has scarred the wood
of today’s
mask of impotence.
And look – today
you take vengeance for someone’s dying,
but no! Death requires sex,
and afterwards you breast feed
an old man dying in the words
of what’s not written by him Yesterday.
And look – he’s in his office
with cane propped into the wood
and writes words in the soot:
“Time is a man,
woman is not yet born”

Michaela Angelova is a young Bulgarian poet who had her debut recently in the journal New Social Poetry. This is the first poem by her that has been translated into English. 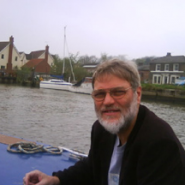